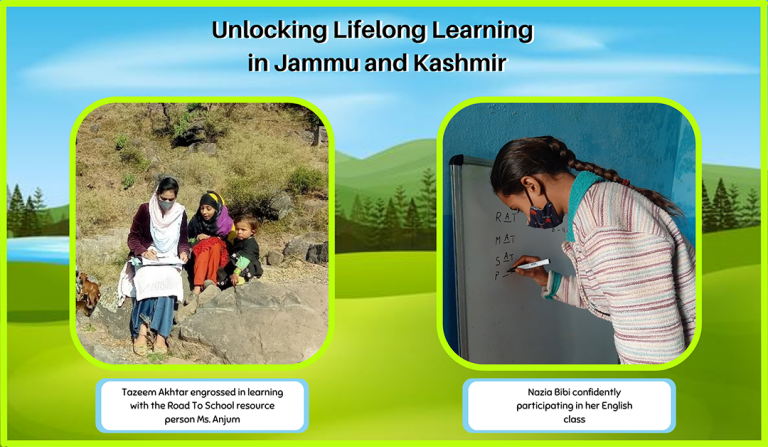 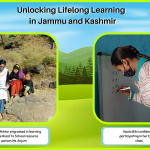 High up in the mountainous terrain of Pir Panjal in Jammu and Kashmir, the Road To School program, implemented by Learning Links Foundation, has successfully unlocked doors to lifelong learning for two young girls. Aimed at addressing the learning needs of children in rural, tribal and low-income communities, the Road To School initiative is being implemented at several locations in India. With support from Ashok Leyland, operations commenced in Jammu and Kashmir in September 2021. The program currently impacts 36 government schools in 6 districts of the union territory: Rajouri, Reasi, Udhampur, Baramulla, Bandipora and Kupwara.

Tazeem Akhter (12) is enrolled in a government school in Rajouri district, and Nazia Bibi (11) is a pupil at a school in Reasi district. In spite of the difference in location, the two are bound by a common thread. The fathers of both girls are shepherds, and their families usually struggle to make ends meet.

Whereas this tough situation directly impacted Tazeem’s education, it took an indirect toll on Nazia’s progress as a learner. Tazeem dropped out of school in grade 2, and began supporting her father by grazing goats and horses in the high-altitude area. Both father and daughter sold goat and cow milk to the local community people to earn a livelihood for their family. On the other hand, Nazia continued to attend school, but became a shy, under-confident backbencher, who refrained from talking to her classmates. Not even the teachers in her school could help to bring her out of her shell or motivate her interest in studies.

Fortunately, before these young girls could completely fall off the learning grid, they came under the vigilant radar of the resource persons from Road To School. While Tazeem was noticed during the regular community visits conducted by the resource person in her area, Nazia’s timid and self-isolating behaviour was spotted in the school itself.

To re-establish Tazeem’s links to school and learning, the resource person counselled the child’s parents through several home visits, convincing them to send their daughter back to school. In Nazia’s case, the resource person attached to the school began interacting directly with the child, giving much-needed attention to boost her morale and confidence. Thereafter, Nazia’s parents were also counselled to ensure her regular attendance at school. Thus, with the help of the Road To School team, pathways to learning were successfully reopened for both girls.

Tazeem has now resumed going to school, and is also attending the community classes conducted by Road To School. She shows a flair for Mathematics, and eagerly participates in all the cultural events. Tazeem’s mother is very proud of her, and hopes that her daughter will become a role model for other girls in the community. Nazia, too, has started taking part in the extracurricular programs at school. This has opened the avenues for her interaction with peers, and her personality has blossomed as a result. Today, she not only confidently introduces herself in English, but is also an active learner during Mathematics and English classes.

Both young girls had to temporarily traverse rough patches, but timely intervention from the Road To School program brought them back to the path of learning with renewed focus and enthusiasm. Their story strongly underlines the need to give individual attention to the many other Tazeems and Nazias around us. Their educational progress may have been blocked by circumstances beyond their control, but the spark to learn is still present within them, waiting to be rekindled.