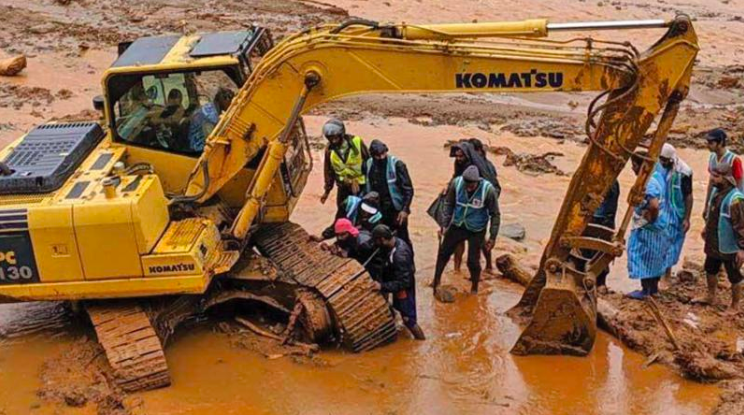 The battle to save the people hit by the devastating landslide at Puthumala in Wayand was led by Wayanad sub-collector N.S.K. Umesh.
For 18 days from the time the calamity struck on August 8, Mr Umesh struggled hard along with over 800 workers and volunteers and relocated over 3,000 people and retrieved 11 bodies facing adverse weather and danger to their lives.

In the process, the IAS officer of 2015 batch, witnessed moving scenes like the retrieval of the body of a four-year-old amidst sobs from the crowd and a pregnant woman being rescued from the hills and taken to a hospital.

Mr Umesh and his team set out to the spot during torrential rains on the first day and reached there after over two hours whereas normally it takes only 45 minutes. On the way at Kalladi, the road was blocked by a landslip. Kalpetta MLA C.K. Saseendran, members of Meppadi panchayat and forest officials also came there by 6 p.m. They took a detour to the hills and reached the Mundakkai forest station where about 200 people from Puthumala were relocated, he said. “When we returned to the spot where our vehicle was stopped, it was around 10.30 p.m.,” he said. “The 200 people were saved due to the premonition of the panchayat president and the local residents,” he said.
The ‘Mission Puthumala’ started on August 9 with the personnel of National Disaster Response Force (NDRF), Army, police, fire and rescue, health workers, volunteers and 14 earth movers. “I was the team leader, incident commander in disaster management terms,” Mr Umesh recalled. “We divided the volunteers into groups with each group headed by a trained expert from the forces. There were fears of recurring landslides and I had to look up to the skies and warn the volunteers to stop operations and move to safety ahead of rains. As there was no connectivity, we used wireless sets for communication.”
The slush was spread over 20 to 30 acres area with 16 to 20 feet thickness.  In the first six days, the team was able  to  retrieve ten bodies.
Later, they decided to extend the area of search up to Nilambur, trekking down 25 km. “I cannot forget the day when a crowd wailed as the body of a 4-year-old baby was retrieved. At another spot, over 60 people created a human stretcher across the slush and water to carry a pregnant woman who gave birth the same day,” he said.
Mr Umesh was busy on Friday also at Puthumala to identify a location to rehabilitate the stranded families. A native of Madurai, he had not contacted his wife Vigneswari,  sub-collector of Kozhikode, for many days. “She knew that I was with my team and felt happy over it,” he said.

Aarohi : Making a better way for the future