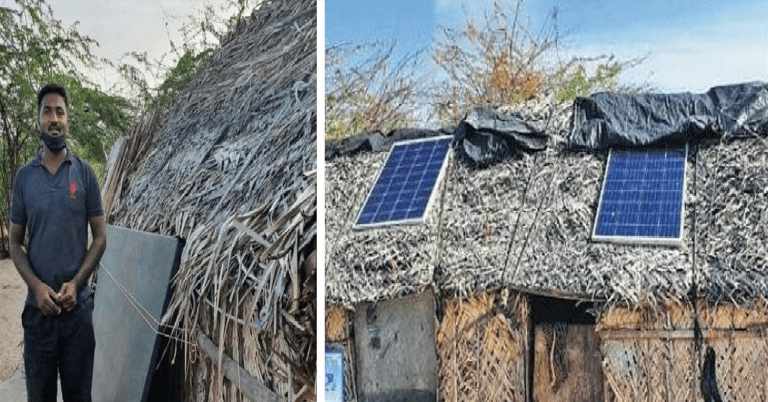 “Until I completed my Class 12 examination there was no electricity connection in my village. I have spent all my school life studying with a lantern that would need kerosene to work,” says 30-year-old M Sakthivel, a resident of Thoothukudi in Tamil Nadu.

It took the Tsunami for the villagers of the coastal town of Thootukudi to see the lamp posts work thanks to the solar-powered panels. “Up until that moment we had only heard of electricity but we had never experienced it in our village,” says Shaktivel.

Since he grew up with no electricity he experienced first-hand the positive changes having access to electricity made to his life.

He decided then to try and work towards providing this basic amenity to others in his village. It was because of Shaktivel’s persistence that he has been able to provide solar-powered rooftop panels to light up 15 homes in the village.

Having grown up in a fishing village, the obvious step for him was to take up fishing along with his father. Shaktivel says, “We have seen a lot of hardship while growing up. There were so many days when we had no money to buy food so we would end up either sleeping on an empty stomach or make do with some watered-down version of porridge that my mother would make for us.”

Having discovered YouTube four years ago in a sense changed Shaktivel’s life and speaking about it, he says, “Enthused by the kind of reach YouTube has, I put out the first-ever video on my channel called Thoothukudi Meenavan. The first video was recorded with a smartphone, and the underwater shots were recorded by wrapping the phone with a transparent plastic cover. The video was about how the fishermen travel in boats into the depths of the sea and catch fish using nets.”

The response to the video and his channel motivated him to make more videos. To date, Shaktivel has made more than 500 videos and has a subscriber base of more than 7 lakh. “I wanted to use the platform to find ways to help my community and the first thought that struck was to try and provide the community homes with electricity,” he says.

With each video, Shaktivel posted he found the traction and reach increasing. “I have viewers based in Sri Lanka, Malaysia, Singapore and other countries who have in the past had some connection to the South of India and expressed their desire to help out. They started sending me money, which I decided to use to get solar panels installed,” he says. He began experimenting and says that the first two houses that he worked on turned out to be expensive and he spent close to Rs 36,000 and Rs 60,000, respectively, on installing the solar-powered panels there.

“I learnt from that and the subsequent homes we worked on were done under a budget of Rs 16,000, which allowed us to use three lights, one fan and also the chance to charge our cell phones and torchlight without any problem,” he says. Since they live near the sea their homes often have small insects. Now they can keep their homes clean and insect-free because of the uninterrupted supply of electricity at night.

Until the solar-powered panels were installed, Shaktivel says that even to charge mobile phones, the youth from the community would travel to nearby hotels. “Imagine spending money on buying a cup of tea just to be able to charge your phone. The excitement of now being able to charge their phones in their own homes is unparalleled. It is something that I cannot even begin to describe.”

It has taken Shaktivel close to one year in getting the 15 homes installed with solar panels and he says that it wasn’t smooth sailing all the way through.

“There were times when I got stuck because I did not have enough funds. The joy that I saw when the first panel was installed was what kept me focused on getting the job done,” he says.

He adds, “Even now when I reach for the switch to turn the light on, it is a moment that makes me smile. Not having to live in darkness is such a huge plus for us.”