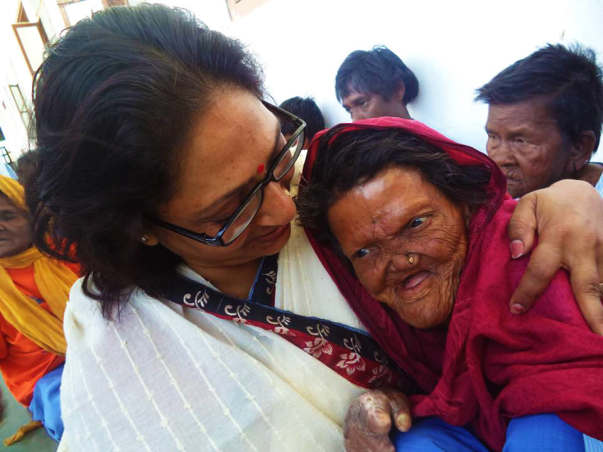 Madhuri was in class 9 when she became friends with Bharadwaj. They traveled from their villages every day to Aligarh. She went to her school, while he went to college. In the bus, they discussed a topic unusual for two teenagers from two small villages in Uttar Pradesh. They talked about their shared dream – a meaningful life, dedicated to helping those in need. They planned to be partners in this venture.
Eight years later, they were married and ready to work on their dream. They both became doctors and would bring the abandoned sick people from the streets into their homes. They went a step further, and announced to their shocked families that they would not have children. All this, for an idea hatched when you were children, the family said. Undeterred, they continued.
Finally, seven years later, they established ‘Maa Madhuri Brij Varis Sewa Sadan, Apna Ghar’ on June 29, 2000, on Madhuri’s 27th birthday in Bharatpur, Rajasthan. Today, Apna Ghar helps over 4,000 people in their 17 homes around north India. These are helpless, sick people on the streets, who have nobody else.
How it startedFor Bharadwaj, it started when he was 5 and anguished at the death of 85-year-old Chiranjee Baba in his village. Chiranjee Baba had never married and lived alone in the village. He grazed everyone’s cattle, and in return was fed and clothed. When he fell and injured himseslf, no one came to help him. Eventually, in a month, his wounds festered and he died.
“It’s not that nobody wanted to help him. Everyone did. But they held back from taking responsibility, afraid it would fall on their plates. People will help, if someone takes responsibility and shows the others how they can help,” says Bharadwaj.
Too young at the time, he remembers wanting to help, but being wary of Chiranji Baba’s sickness. This unease slowly changed into a determination to help the sick and to be able to act and save lives. In Madhuri, he found an echo of his own mission. They both became doctors because they felt that this was how they could best serve the needy.
Today, Apna Ghar takes in any one who needs medical help, be it a child, an adult or even animal. Those that are sick and seem to be without any succour on the streets are referred to Apna Ghar. “Everybody who comes here is Prabhuji (God), because they are here to teach us how to be good people,” says Madhuri.
The reference to divinity has evolved because of the challenges that the couple managed to overcome. Every morning, the caretaker writes Thakurji ki Chitthi or a letter to God. In the letter are all the things needed immediately by the Ashram. It is also put on a board where any visitor can see it.
“All the 17 homes put together, we have a daily expense of Rs 4 lakhs. But it all gets taken care of. We write the Thakurji ki chitthi, and some or the other kind visitor decides help us out and cover one more day. It is God’s will,” says Bharadwaj.
Both founders firmly believe it is God’s work and that is the force easing their path. And the NGO has overcome insurmountable odds. Naresh Jain, the landlord of Apna Ghar Delhi asked for a rent of Rs 3 lakhs per month for his property. One visit to Bharatpur, changed his heart and he wrote of their rent for ever. He simply handed over the keys to Bharadwaj and walked away.
Every day, beings are rescued from the streets, brought to the house and given medical attention. If someone requires more specialised help, that patient is taken to the right doctor and treated. Over time, they are rehabilitated, and if possible reunited with their families.
“Our Prabhujis come from various backgrounds. Many of them are from well-to-do families, who have temporarily lost their mental balance. Many are also abandoned by their families. We take everyone in and do what we can do,” says Madhuri.
A home that runs on inspiration
This couple’s focus and dedication is what keeps Apna Ghar going. Even the government, that grants funds only to NGOs for men, women or children and not all three, made an exception and gave them funds to help with their good work.
These two doctors have chosen a noble path to help the really vulnerable, and they need support funding these medical expenses. Your contribution will help Apna Ghar work another day.
Source: https://milaap.org/fundraisers/apnagharbharatpur