This 7-YO Ludhiana Boy is Waging War Against Single-Use Plastic & Winning It Too! 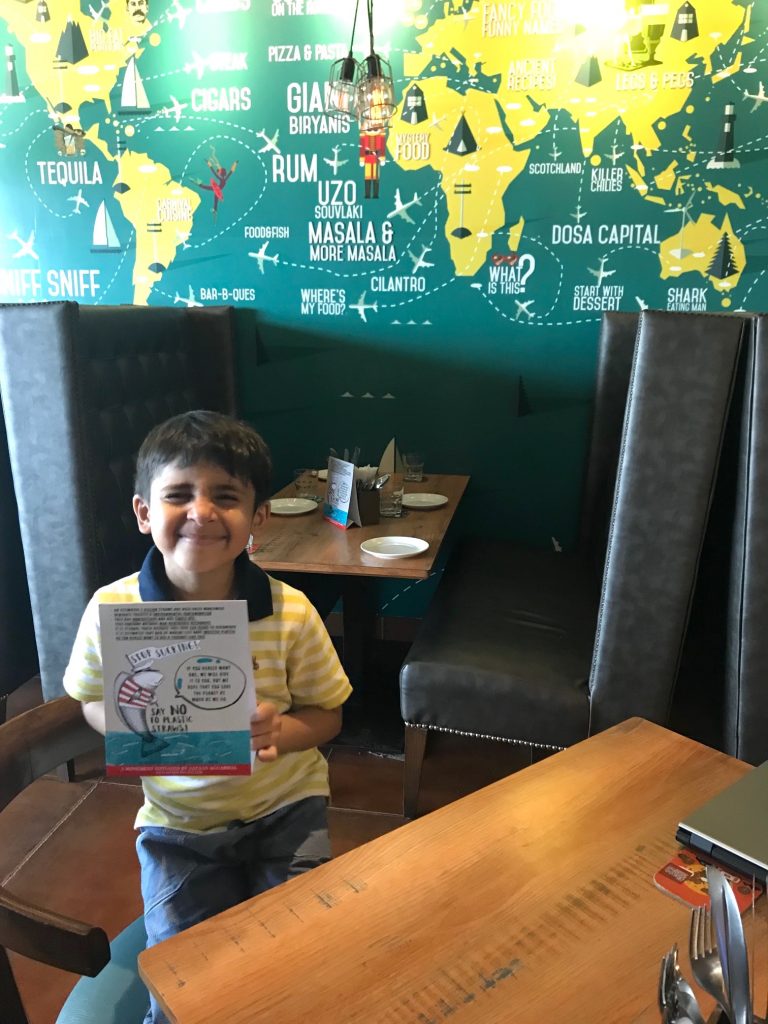 At first sight, Aayaan Aggarwal would pass off as any other happy-go-lucky child, for whom the world is a curious place that has many wonderful mysteries and things to offer.
But the 7-year-old from Ludhiana has been actively spearheading an anti-plastic crusade across the city during a time when the harmful effects of the toxic non-biodegradable material has already begun to show scary implications for our environment.
A student of Class 2 at Sat Pal Mittal School, Aayaan had always nursed an inclination towards science and is endlessly curious about the world around him—a trait that his parents, Karan and Neha Aggarwal, have encouraged.
It was a trip to the United States during Aayaan’s school vacation this year, that opened the little science enthusiast’s eyes to the real world problem of plastic and how it was penetrating seas and oceans and killing marine biodiversity—an area that particularly was close to his heart.
“During the trip, Aayaan saw a picture of a dead whale being flashed on a news channel that had died owing to ingesting different plastic components that remained in its stomach. Given the love he has for marine sciences, the incident left a long-lasting impact on our son, and he understood about the ill-effects that plastic has on all life forms and on our planet—the only one that has life,” says Neha to The Better India.
Starting from that moment, Aayaan decided that he was going to champion against plastic, and single-use plastics in particular, and wanted to begin with himself and his family.
While they were in the US, he observed and learnt about the importance of waste segregation and the colour coded system practised there. Once they returned to Ludhiana, Aayaan asked his mother to quit using plastic bags and refuse to accept them from departmental stores and restaurants as well.
“It is quite rare to see a child as young as Aayaan to have so much conviction for something he truly believes in. While neither of us had considered the thought previously, he managed to convince us as well. He was so firm about his anti-plastic resolution that he refused to take a plastic tiffin-box or water bottle to school, and even containers with plastic lining were a strict no-no!” she says.
Once the school started, Aayaan decided to take his crusade against plastic even further and approached his class teacher to set up an appointment with the principal.
It took some time for the meeting to take place, but when it did happen, the principal was impressed by his persistence and ideas.
“He explained how plastic was posing a serious threat to the environment and that as a school, they should completely ban it across the school premises. Ma’am was not only impressed by his conviction to the cause but also decided to actually implement the no-plastic rule in campus, starting with banning plastic tiffin-boxes or water bottles. In fact, Aayaan was also given the opportunity to speak during the morning assembly where he shared his ideas with the entire school,” Neha proudly says.
And this proved to trigger a chain reaction, for Aayaan now decided to reach out to restaurants in the city and request them to stop serving soft drinks with plastic straws.
He even gave them placards that they can place over the tabletops to raise awareness amidst the customers.
“Till now, he has been able to reach out to Small World Cafe, Cake square, Kuchh Bhi, Flame Bois, Just Baked Cafe, Belfrance and Hot Breads. He has convinced them to give straws to customers only on request and placed placards on each table to sensitise the diners too. He continues to sensitise people around him whenever he gets a chance,” says Neha.
The young champ hasn’t stopped there. Together with his father, he has flagged off a website, Anti-Plastic Crew, in June that discusses the hazards of plastic through the eyes of the 7-year-old. “Everything in the website contains only things that Aayaan has come across and talks about in public,” she adds.
While the fact that school has reopened, makes it difficult for Aayaan to go about raising awareness, the family of three still finds the time to visit at least one new restaurant every week, to try to convince them to stop using plastic straws. “His greater aim, however, is to include plastic bags as well in his crusade,” Neha states.
His persistent efforts to ban plastic even earned the young boy a chance to speak in front of over 100 entrepreneurs from across India in Delhi and even here, he urged them all to limit plastic usage in their lives.
But nothing beats the meeting that Aayaan had with Avinash Rai Khanna, the vice president of Bhartiya Janta Party (BJP). “Mr Khanna was so impressed by Aayaan’s vision, and ideas that he wrote an official letter addressed to Prime Minister Modi about Aayaan acknowledging his efforts,” a beaming Neha adds.
In a time where even adults remain indifferent to their indiscriminate plastic trail, Aayaan’s sensitivity towards the planet and conscious efforts to cut out plastic showcase a great environment crusader in the making. The role of his parents in this crusade must also be appreciated, for it is familial support and encouragement that makes children confident enough to face the world.
We salute Aayaan and his parents for their selfless participation to cut down plastic usage and hope that more people begin to consciously make changes to their lifestyles for the sake of our planet, which like Aayaan says, is the only one that we know which harbours life!
You can check Aayaan’s website, Anti Plastic Crew, here.