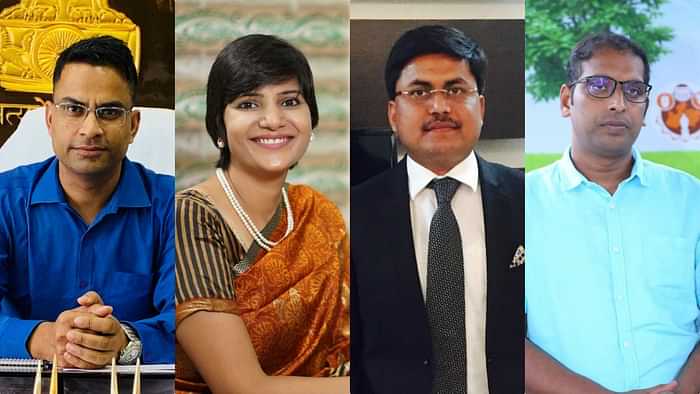 New Delhi: Hari Chandana Dasari, zonal commissioner, Hyderabad, is a recycling crusader.
From beautifying over 120 parks in the city with discarded plastic bottles to making furniture out of used tyres and oil drums, Dasari has been showing the way in waste management.
“I noticed that some unused tyres are lying in the municipal corporation’s office. I got them cleaned and painted. Later on, I got them installed in parks. Today, furniture made out of tyres and oil drums are installed in many parks in the city,” Dasari told ThePrint.
Dasari, however, said she didn’t receive much encouragement when she went ahead with her ‘recycling’ plan. “The engineers in my department said it will not change things much. But I accepted it as a challenge and the result is here for all of you to see,” she added.
Besides waste management, Dasari also got a dog park constructed in Hyderabad — claimed to be one-of-its-kind with over 24 installations meant for dogs. Facilities such as vaccination are also available there.
Dasari’s recycling initiatives assume significance as India is battling plastic and garbage menace. According to a 2017 report of the Central Pollution Control Board, India generates around 25,940 tonnes of plastic waste annually. Data collected from 60 mega cities show that almost 90 per cent of this plastic waste is dumped into drains or on the streets instead of being recycled.
Dasari is, however, not alone. There are several other IAS officers, who in their own ways, are working towards making people’s lives better across the country.
Indore cleared of 13-lakh tonnes of garbage
Dasari’s classmate Ashish Singh‘s endeavours in Indore, Madhya Pradesh, have been much talked about.
Singh, who is currently the commissioner of Indore Municipal Corporation (IMC), has managed to dispose of 13 lakh tonnes of garbage within just six months. No wonder, Indore, for the third time in a row, was judged the best city in terms of cleanliness this year.
“Previously, only 2 lakh tonnes of garbage were processed in two years,” said Singh, an MP-cadre IAS officer of the 2010 batch. When Singh was appointed the commissioner of Indore civic body last year, he took it upon himself to clear the city of its garbage.
The IMC disposed of dry and wet waste separately. Singh said wet waste was recycled to extract methane gas, which in turn was used as fuel for the city’s buses. And the fertilizer, which was collected as a by-product of this process, was handed over to the farmers.
Asked if he received the state administration’s support in his initiative, Singh said: “As far as cleanliness is concerned, I had the full support of Indore’s mayor.”
Singh’s new challenge is now to restore the city’s dying rivers. Two of the city’s rivers — Kanh and Gambhir — have turned into drains with sewage flowing into them.
Outlining his plan for restoration of the rivers, Singh said 434 sewage points of these rivers have already been identified and he hoped that by December the rivers will get a new lease of life.
If Singh is taking care of Indore, another IAS officer posted in Bhopal now has made a positive contribution in a unique way.
Pankaj Jain, additional commissioner in the District Development Authority, sent his daughter to an anganwadi school when he was posted in Khandwa.
“The anganwadi school was a very clean place and their staff got very excited after I sent my daughter there. My daughter also enjoyed a lot,” Jain said.
“My small gesture encouraged the staff at the anganwadi to work towards improving the school,” Jain said, adding that the anganwadi is ISO-certified now.
Transforming villages in Sikkim
Raj Kumar Yadav, commissioner of east Sikkim, has gone the extra mile.
A state-cadre IAS officer of 2009 batch, Yadav and his colleagues have “adopted” five villages and made lives of over 7,500 villagers better by renovating roads, supplying  electricity, water, among others.
Yadav said he asked his colleagues to fan out across the villages and talk to the residents about the problems they faced.
“Implementing the concept of ‘Model Village’ is not possible without constant dialogue and active support from the villagers,” he told ThePrint.
After continuous work, Yadav said, the villages now have electricity, water, concrete roads. Even schools have teachers in regular attendance, he added.
IAS officer who pasted his mobile number on hospital walls
Avnish Sharan, collector of Kabir Dham district in Chhattisgarh, is popular on social media for his social work.
Sharan, a Bihar native, has pasted his phone number on the walls of schools and hospitals so that people can reach him at any time with their issues.
“The villagers and students keep me informed about everything – from lack of teachers in schools to missing facilities in hospitals,” he told ThePrint.
The collector also examines and eats mid-day meals in schools and sometimes also teaches students. His idea of motorbike ambulances has become extremely popular in the district.
“Today everybody wants a government job, but nobody wants to go to a government school or a government hospital. Little bit of motivation and some positive work hold the key to completely change the society,” said Sharan.
Source:https://theprint.in/india/these-ias-officers-are-scripting-stories-of-change-across-india-making-lives-better/272440/