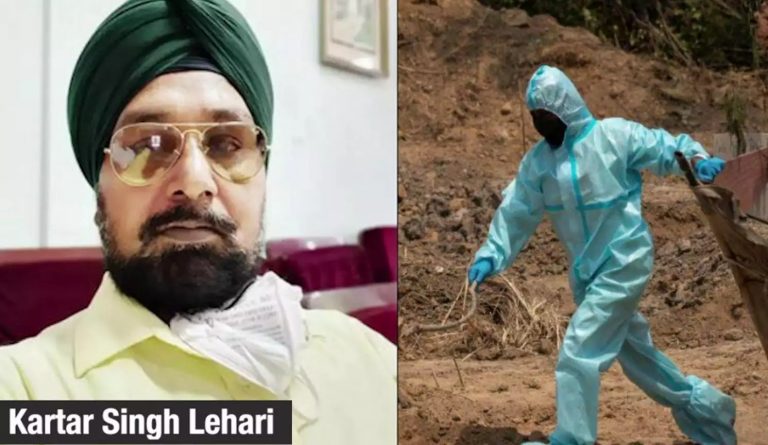 “There is no higher form of service to humanity than giving a dignified send-off to people rejected by their own.”

In the present times, social distancing has become the buzz word and action to follow, both from the alive as well as the dead. There seems to be no respite for the people even after their unfortunate demise from this disease as many individuals have refused to cremate the bodies.

In such trying times, there is one individual along with his family who has taken the onus upon himself to perform these actions. Kartar Singh Lehari, a patwari has volunteered to cremate the bodies of people who have died due to this disease. Since April 2nd, when he cremated the famous spiritual singer, Padma Shri Nimral Singh Ragi. Toll today, he has cremated another 21 bodies that have passed away due to Covid.

Lehari faced resistance from the residents of the area surrounding Verka Cremation ground, when he was asked by his senior officials to find a cremation ground for Ragi’s last rites. The patwari, along with the ambulance driver and the helper, under the full guise of PPE kits took Ragi’s body in an ambulance and prepared the pyre.
Lehari has the full support of his wife, Jaswinder Kaur, a teacher and he has now made it his mission to help in the cremation of the patients that died due to this disease. Given the large amount of misinformation as well as the social stigma around the cremation of the people that died due to the disease, a number of families tend to disown and abandon their loved ones. Lehari is slowly seeing a shift in the attitude of people with families willing to come down to the cremation grounds but he still sees a long way to go.
To watch their interview, please visit: https://www.youtube.com/watch?time_continue=38&v=uFMUcPodgDg&feature=emb_logo
The story has been extracted from https://timesofindia.indiatimes.com/city/amritsar/he-cremates-abandoned-covid-victims/articleshow/76500455.cms