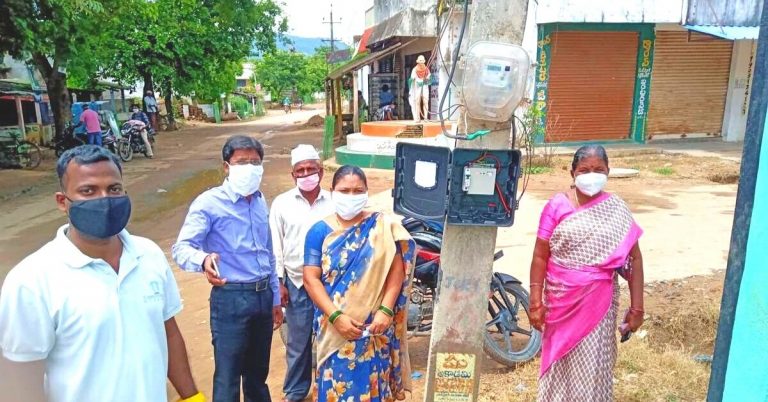 Growing up in Gopalapuram village in Warangal (Rural) district, Raju Mupparapu noticed how streetlights in his village, which were switched on as early as 5 pm in the evening, weren’t switched off in the morning. While most residents overlooked the fact that streetlights were on even during the day, what Raju saw was an immense waste of electricity.
That’s why he felt compelled to do something about it once he grew up and obtained the technical know-how to fix this problem.
Today, the 30-year-old has installed his own device equipped with a Light Dependent Resistor (LDR) sensor in 120 panchayats and the Warangal municipality. The device automatically detects the presence or absence of light and shuts off the main system controlling streetlights.
“My device (Natural Street Lights Switch), which has a photosensor, is attached to this system. It automatically detects the presence or absence of light to shut off the main system controlling the street lights. Based on whatever data I could collect from electricity meters in these villages, we witnessed a 30% drop in their power bills. This is not an exact figure for every village since each one has a different number of streetlights and usage levels. But this volume of saving is significant for gram panchayats as the government insists that they pay their electricity dues monthly – which some are unable to do,” says Raju.
Early Days, Innovation, Challenges
Raju always evinced a keen interest in electronics ever since his teenage years and went on to complete his BSc in a college located at the nearby town of Narsampet. For some time, his father also worked as an electrician, which he believes influenced his interest in electronics.
“I worked on the electricity-saving system in 2014 and tried to get it implemented in my own village. But I had to drop the idea due to lack of finances in the panchayat. When my innovation was picked up by a local publication in 2016, the former Collector of Warangal (Urban), Prashanth Patil, called me and asked me to install two of these devices each in 10 gram panchayats. My father was an electrician, and so that helped a bit. For this particular device, however, I did not take inputs from anyone and built it myself. I just felt it was such a waste if street lights were on during the day. My device can be implemented all across India and it only costs between Rs 3000 and Rs 3500,” says Raju.
Egging Raju along the way was Patil, who witnessed this innovative device work first hand.
“Sometime in 2016, Raju came to my office and asked whether he could demonstrate his innovation. More than an innovation, it’s a simple, yet very effective, intervention. Once the sunlight falls upon the PVC cells in this device, it automatically switches off the street lights, and when the sun goes down, his system switches on the street lights automatically. Normally in villages, since there are no switches to either turn the power on or off for their streetlights, all the bulbs and tube lights are on 24/7. It causes a serious wastage of expenditure. Electricity charges are high for the gram panchayat, and the lifespan of tube lights and bulbs also diminish.
So, Raju’s simple intervention gave us hope. Initially, we installed his device in 10 gram panchayats, tested it out for five to six months, took feedback from sarpanches and other village officials, and eventually, other sarpanches reached out to me saying they want this device installed in their villages. Subjecting this palm-sized equipment to a field test was important because we had to see whether it would withstand the vagaries of nature, and it did,” says Patil, who is currently the Collector of Nalgonda district.
On whether he had faced any challenges, Raju says he hasn’t but notes that there were power outage issues as small transformers set up in the village would frequently cause short circuit problems.
“This would affect the street lights also and so I explained the issue with these transformers to the villagers,” informs Raju.
“Currently, my system is working in about 120 panchayats, one municipality (Warangal Urban), and about 8 to 10 rice mills in Warangal (Urban), Warangal (Rural), Mahbubabad, and Mulugu districts. I first implemented this in my own village Gopalapuram,” he adds.
“A key lesson we can learn from Raju’s innovations is that raw talent exists in rural areas. Normally, we see recognition for people from premier institutes like the IITs. But these innovators are aware of local problems and they think of solutions that can best address them. Eventually, his device was implemented in another 100 villages and also introduced in hospitals, government offices and of course gram panchayats as well,” says Patil.
Other innovations
The LDR sensor is not the only device that Raju has developed. There are solar-powered charging systems for mobile phones in public places, remote control to switch on water pumps in fields sitting at home and a theft-tracking device for homes based on heat sensing that you can track through your phone sitting anywhere.
In the last few months, however, he gained recognition for his solar-powered grass cutting machine, solar-powered spraying machines for pesticides and a pedal-operated hand wash and sanitation system.
In fact, the National Innovation Foundation called the pedal-operated system “a timely solution in response to the need for contactless devices in the prevailing COVID-19 environment.”
Nonetheless, the 30-year-old innovator feels this is only the beginning. He believes there are some exciting innovations on the way, although he didn’t chime in with any details.

The story has been extracted from https://www.thebetterindia.com/236794/telangana-rural-innovation-invention-ias-raju-mupparapu-innovator-saving-electricity-bill-india-nor41/