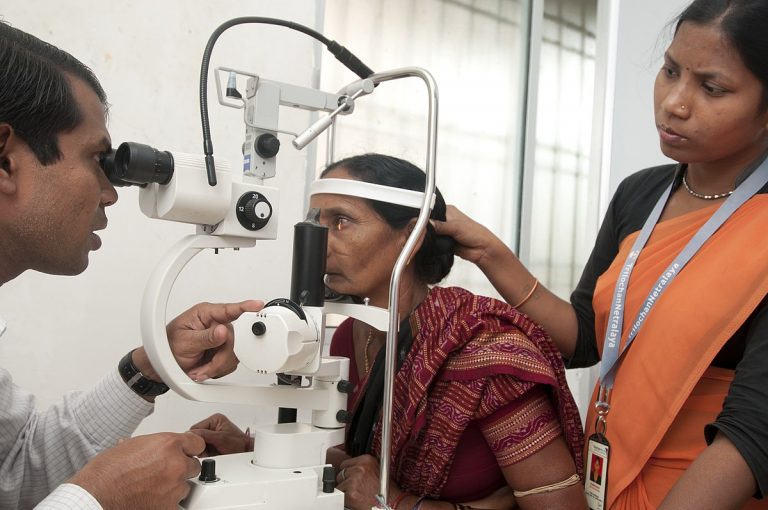 Trilochan Netralaya is a non-profit charitable eye hospital which was established in Sambalpur, a part of western Odisha by Dr. Shiva Prasad Sahoo in 2008.
Having been born in a low-income family Dr. Shiva struggled a lot to get into the medical profession. Given an opportunity to study in a Government of India funded School called Jawahar Navodaya Vidyalaya, Shiva realized the meaning of good education and that of human values. He decided to pay back to the society for the long seven years of study he enjoyed absolutely free of cost during his school days. After completion of post graduation, he left the opportunity of a luxurious high paid salaried job and decided to stay back to serve the needy and poor people of western Odisha though he himself belongs to the eastern (coastal) Odisha.
Since its inception, Trilochan Netralaya has transformed the lives of more than 100 thousand people through sight restoring eye surgeries in around 12 districts of western Odisha. Trilochan Netralaya has touched all these tribal and poverty stricken districts from Sundergarh, Jharsuguda, Sambalpur, Deogarh, Sonepur, Bolangir, Bargarh, Nuapada, Kalahandi, Nabarangpur, Koraput, Malkangiri, Raigada and Sambalpur.

These are the districts which are very popular in the name KBK after the Govt of India started special development drive by the then Prime Minister Late Mr Rajiv Gandhi. Many of these districts have been dominated by tribals and infested by Naxalites for many many years and even today.

Blindness is the greatest tragedy in human life next to death and 80% of this blindness is avoidable. Western Odisha is known for poverty, illiteracy, and ignorance and negligence. There is poor access to health care too. People living in a miserable condition can’t even dream of getting basic eye care.

Trilochan Netralaya has been working hard since last 10 years to reach the unreached for whom quality eye care is just a dream.

Dr. Shiva is not alone now. He is accompanied by another three full-time ophthalmologists and a team of 60+ odd paramedical and support staff. Most of these paramedical staff are college dropout girls from very poor background, mostly from these western Odisha districts. Thus, not only eye care for the needy, Dr Shiva has opened a door for women empowerment and creating jobs for these 100 odd families. The number still counting each year.
The three eye care units under the public charitable trust, Vision India Foundation, based in Sambalpur, Bhawanipatna (Kalahandi) and Jagatsinghpur cater to the needs of 10 million population with 10000+ sight-restoring surgeries each year.
At a very young age Dr Shiva has been awarded with many prestigious awards like eye health hero, K S Sanjivi award, Sight Saver award etc. He was invited many times as a surgeon to render his skilled service beyond state and country border.
But the irony is Dr Shiva still struggles to serve and survive. He still dreams of world class eye care even for the poor so that everyone can see better even in the remotest part of the country because we are a 70 years old democracy!