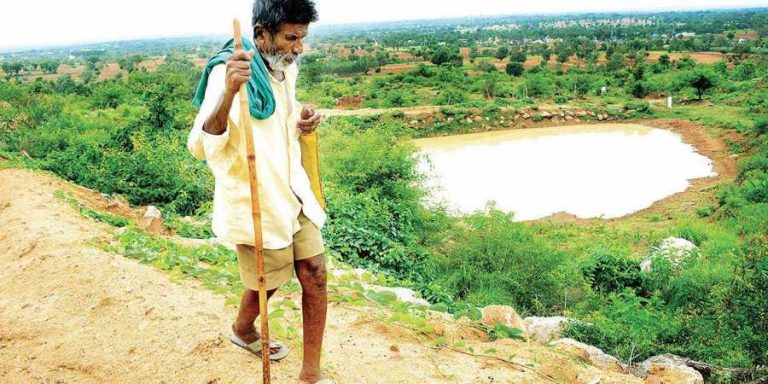 DASANADODDI (MALAVALLI TALUK): Eighty-two-year-old shepherd Kamegowda may be illiterate, but he has been able to do what most so-called educated and environmentally conscious persons only wish they had done. He is credited with greening an entire hillside at Daasanadoddi village in Malavalli taluk of Mandya district, an effort that took him four decades and culminated in 14 ponds being developed and maintained by him. These ponds are filled with water all year round — even during the scorching summers.
It was about 40 years ago when he realised that the almost barren Kundinibetta hill next to his village had sparse shrubs with almost no greenery. While taking his flock of sheep grazing on the hillside, he saw animals and birds stressed from lack of a watering holes on the hill. Whatever water the hill received through rain, only flowed down its slopes. It hardly retained any water and what little remained either evaporated or got absorbed into the ground.
That’s when this 2017 Basavashri awardee hit upon an idea: Why not develop a pond to provide animals and birds a watering hole? It started from there, although he doesn’t remember the precise date, but estimates that, so far, he has spent nothing less than Rs 10-15 lakh in designing, developing and maintaining the 14 ponds, some named after his grandchildren. Almost all the money is from various awards he has won throughout his life.
When The New Indian Express visited his haven — a half-complete house on a two-acre land — the hill presented itself in lush green attire, thanks to the 14 ponds, linked by a waterway that ensures when the upper ponds on the hill are filled, the surplus water flows into the ponds below.
Kamegowda underwent an eye operation a couple of weeks ago, and the doctors have advised him not to step out for fear of contracting an infection. But this is what he has to say: “I close my eyes and come out; I know every inch here. If a drunkard is advised not to drink, will he stop drinking? I too have an addiction.
The trigger
The idea to design, develop and maintain hillside ponds was triggered by observing animals and birds struggling on the Kundinibetta hill due to lack of water. Today, he has built 14 fairly large ponds on the hill, turning it into a green abode.
Green deeds earn him ‘Madman’ tag
So passionate and addicted to looking after his 14 ponds is this 82-year-old Kamegowda of Daasanadoddi in Malavalli Taluk of Mandya district that people in his village and his relatives started calling him a “madman”. For the last 40 years, almost everyday between 5 am and 9 am, he has dug ponds, and grazed sheep from 9 am to 7 pm. “Sometimes, I used to go to the hillock to dig a pond during night with lamp or also on a full moon day,’’ he tells TNIE when the reporter visited his home on Friday.

Meanwhile, the villagers called him “madman”. But that did not deter his spirit, which saw a barren hillside of Kundinibetta near his village turn into lush green slopes. His eccentric ways saw many of his relatives break off from him.  “After I started digging ponds and spending all my savings on them, I started losing my relatives. But the trees, ponds, birds and animals became my relatives. Some made fun of me …  some opposed me for using government land. But I did not stop. I can challenge anyone! Wherever I take up 5-6 ft of digging, there will be water which will not dry up … even during summers.”

It all started 40 years ago. To begin with, he sold a couple of his sheep and purchased a shovel, spade, pickaxe, and other tools to dig a pond so that animals and birds easily got water to survive. He started digging the land and the first one was done at Daasanadoddi, taking more than six months. Later, with his little savings, he hired workers who helped him to dig other ponds. All his 14 ponds are interlinked.
“Once the pond at the top is filled, water flows to the next pond located at a lower altitude,” Kamegowda, who has never gone to school says with pride. Kamegowda also tests soil quality before taking up digging.
He has made narrow pathways to reach each of these ponds. There are rocks in between,  which host Kamegowda’s painted quotes on nature, blended with philosophy. He visits all the 14 ponds daily. “Do you eat only one day and starve the entire year? I cannot dig a pond a day and ignore them the rest of the year,” he adds.
He has given his grandchildren’s name to these ponds. He even brought grass from outside to grow them on the hillock, so that soil moisture remains and trees remain green. Kamegowda has never taken a loan.“I have spent more than `10 to 15 lakh for the ponds, mainly cash from Basavashree and other awards where they gave me cash. I spent this money only on maintaining the ponds. I have two acres of land … if I did not spend money on ponds, I would have made a few more acres and a better house,” he says.
This octogenarian, who is addicted to constructing and maintaining hillside ponds, only has two acres of land for his children, but 14 ponds that have helped the flora and fauna and the people of his village, 15 km from Malavalli taluk of Mandya district.The Kundinibetta — which has now become Kundurubetta — is a small hillock located in the village and a part of the hill is in the neighbouring Panathalli village. Of the 14 ponds, nine are in his village while five are in Panathalli.
“If I give my children, grandchildren money, it will be spent and they’ll become bankrupt. Instead, if I give them these ponds that has water throughout the year, they will be the richest,’’ says Kamegowda, who resides in a small incomplete house.“When some people give me cash for my personal use, I will say yes, and like a drunkard who spends all that money on liquor, I spend the money on the ponds. It is an addiction!’’ he says.