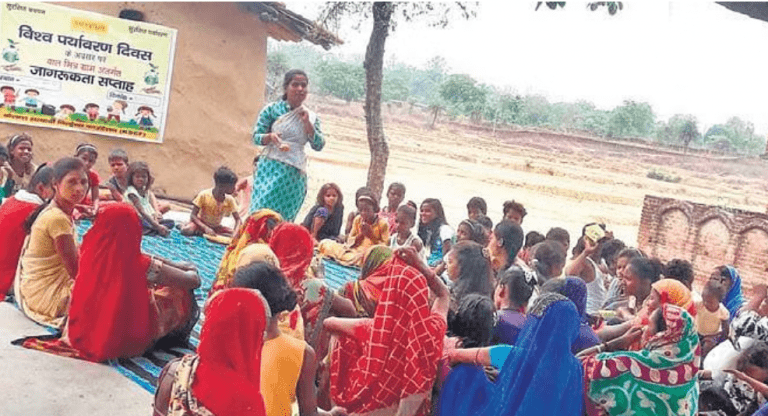 Teenage girl from Jharkhand’s Koderma district is heading a movement against child marriage. Not long ago Radha Pandey had to rebel against evil to demonstrate her will against rampant discrimination against the girl child. She is now part of Kailash Satyarthi-run Children’s Foundation (KSCF) and an inspiration for hundreds of girls. The district administration has designated Radha as the brand ambassador against child marriage.

Radha says girls should have the courage to oppose child marriage. “We can change much through education and public awareness,” she says. The brave girl has just completed her Class 12 exam with first division. She says her team rescued 22 children being forced into wedlock last year, and this year’s count is six so far.

Radha’s father, Surendra Pandey, is the village priest. He had fixed her marriage with youth from a neighboring village. The marriage was due June 23. Radha was the head of Bal Panchayat of Tikait Tola – a Bal Mitra Gram under KSCF. Fully aware child marriage is illegal, she requested her parents to stop the marriage, pleading that she wanted to continue her studies. Her parents were unmoved.

She reached out to KSCF activists after a meeting with other members of the Bal Panchayat and explained her situation. “A KSCF team went to my place and pressed upon my parents to call off the marriage. But they refused to pay any heed to their requests,” recalls Radha. Determined to fight on, she called up her prospective groom’s father and urged him to cancel the marriage or be prepared to face legal action as she would inform the police.

“The KSCF team also forced my parents to call off the marriage and give a written undertaking that they would not get their minor daughter married off till the age of 18 to avoid legal action,” said Radha.
Radha wants to become an IAS officer so that she can work effectively against child labour and child marriage.

When the then Deputy Commissioner Remesh Gholap came to know about her, he visited Radha’s place and felicitated her, making her the brand ambassador against child marriage. The Deputy Commissioner has sanctioned `2,000 per month for Radha under the ‘Mukhyamantri Sukanya’ scheme. He has also bridged Radha’s family with various government schemes, including the ration card, Golden Card for free medical treatment and old age pension of `1,000 per month for her father. Radha’s father said he decided to marry her off due to his poor financial status but is happy it was averted.

“Kailash Satyarthy himself called me up and convinced me to let my daughter continue her studies. My wife too pressured me to postpone the decision,” said Surendra Pandey. He is happy that she has cleared her class 12 exam with first class and is working against child marriage.

Officials at Kailash Satyarthi Children’s Foundation believe that there are two important measures to prevent and stop child marriage: strengthen grassroots institutions such as the gram panchayat, Anganwadi and local child protection bodies and incentivize reporting of incidents of child marriages.

The story has been extracted from: https://www.newindianexpress.com/thesundaystandard/2022/aug/14/jharkhand-meet-radha-pandey-teenage-rebel-who-rescues-kids-from-wedlock-2487342.html