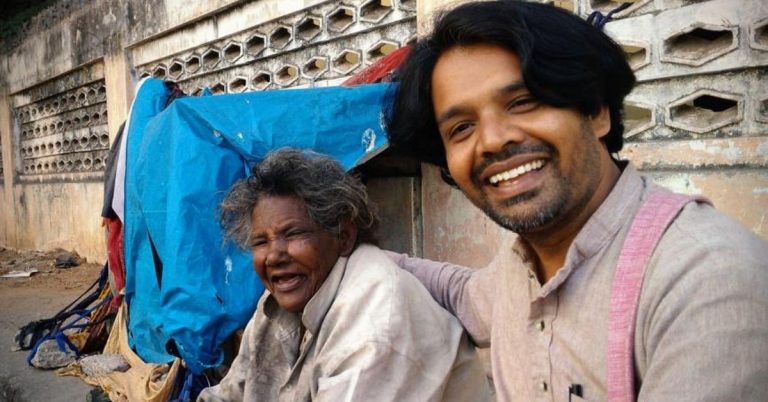 Anumuthu’s childhood was marred with poverty and struggle as a child laborer after he lost his father at only 7. Learning from his own experiences, today he provides dignity and care in the form jobs, medical attention, food and clothes to the homeless through his NGO Snehan.

A few years ago, Puducherry-based Suresh (name changed) lost one eye and four fingers in a tragic accident. As a result, the 55-year-old, who was a rickshaw driver, lost his source of income, which in turn rendered him homeless. To make ends meet, he began selling paper and plastic to afford food, but when his second eye became weak as well, he was out of options.

When Anumuthu, founder of Snehan NGO, approached Suresh for rehabilitation, the latter refused to speak. It took him about a week to open up and share his story. Meanwhile, Anumuthu arranged for funds for his eye operation.

Six months on, Suresh’s eyesight is better and he runs his own shop to sell bags. Although he still lives on the streets, he does not have to beg or starve for food and clothing. He earns upto Rs 300 daily.

There are 1.77 million homeless people in India,  a majority of whom do not have access to shelter, sanitation, food, health and water, let alone a source of livelihood.

The solution to this issue in India is not always appropriate, as the homeless usually end up in dingy and broken shelter homes. Instances of running away from these homes are also not uncommon.

In a scenario where the population of the homeless has increased by 20%, the issues of shrinking spaces and increasing unemployment rate become prominent.

However, the good news is that there are a few like Suresh who have found a life of dignity, thanks to Anumuthu and his organisation, which have touched lives of close to a thousand people, of which 50 are being helped earn a decent livelihood.

‘It’s all about trust building’

He was seven when his father, a woodcutter, passed away. Left with the responsibility of feeding four mouths in the house, he started working as a farm labourer with his mother at a meagre wage of Rs 4. His mother earned Rs 6.

“We would eat rice and water on most days. We had no properties or relatives to fall back on. On some days, my mother would skip meals to make sure we ate properly. It seemed as if there was no light at the end of the tunnel,” Anumuthu says.

When a priest offered to sponsor Anumuthu’s education, he was not sure if he should accept the offer. It was hard for him to trust him, having seen the harsh realities of working with adults in unfavourable conditions.

“The priest rescued me from the site, put me in boarding school and helped me complete my education in electrical engineering. I even did a photography course. Now that I was earning well with my photography stints, I wanted to give back to society. I volunteered with a couple of NGOs and decided to work for the welfare of the homeless. I knew it wouldn’t be easy and my process would have to be gradual if I wanted a long term solution,” says Anumuthu.

The 39-year-old first worked on establishing a brand under which he would sell cotton-based products like bags, aprons, and more. He would use the income to help the destitute and continue doing photography to support himself and his family.

He opened a centre in the city to train women from marginal families to make the products, hired them, and launched his project. In the initial days, he even relied on donations.

He then formed a small team and went around the city to places like railway stations, parks, flyovers, temples, and churches, where the homeless generally live, to distribute food, tea, and biscuits.

“I met a vast variety of people — some would pelt stones at me when I approached them, and others would break down while revealing their past. Some were only 20, while others were as old as 90. A few shared how local gangsters robbed them at night and beat them if they refused to share the money they had earned through begging. A few had been thrown out of the house by their own kids. It took weeks, sometimes months, for me to form a bond with them,” says Anumuthu.

To help such people he meets, he provides them medical care at government hospitals, haircuts and baths alongside food and clothes.

“We also get elderly folks who have very few days left. We send them to organisations that perform last rites. People who have severe wounds or diseases that can be treated are admitted to the hospital. We conduct these visits every week so that they know someone cares about them. Living on streets can be extremely brutal, as displacement is an everyday phenomenon,” he adds.

During this period, Anumuthu realised that some people prefer working to begging. So, he enrolled himself at Kanthari, a leadership programme to drive social change, in Thiruvananthapuram. The training helped him understand the fundamentals of generating employment opportunities for more than 75 people.

Anumuthu and his team provided skill training and employed the homeless at tea stalls, hotels, and shops. He purchased cycles for those who wanted to sell items, vegetables or fruits. Some sell the bags made by the marginal women.

While the livelihood project has been positively impacting several women and men, it has its share of challenges. There have been a couple of people who have taken the money from Snehan and ran away. Anumuthu says such instances are unfortunate, but will not diminish his trust in others.

His next project is to build a shelter home for which he needs Rs 25,00,000. The homeless will be given food, shelter, clothing and other such amenities.

You can reach Snehan here.

The story has been extracted from https://www.thebetterindia.com/263730/india-abandoned-child-homeless-rescue-jobs-ngo-free-food-shelter/