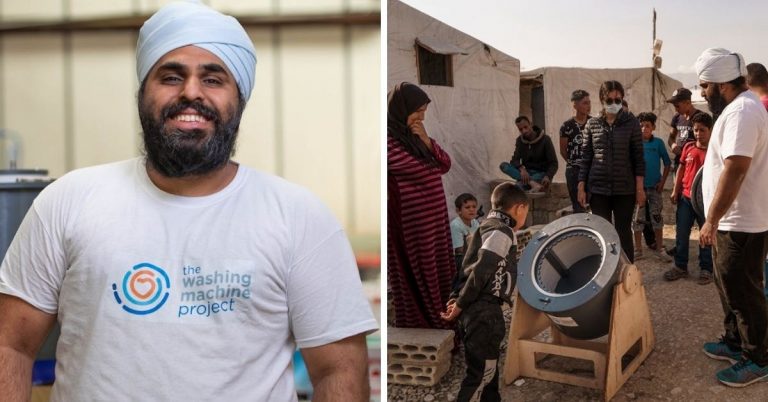 Navjot Sawhney innovated a low-cost, unique washing machine after seeing the plight of his friend Divya. Today, the machine is a ray of hope for women of Iraq’s Mamrashan Refugee Camp and rural India.

When British-born Indian Navjot Sawhney took a sabbatical from work in the UK and moved to India, he had never fathomed that women refugees in Iraq would be forever grateful to him.

And all of this for his work on a washing machine.

An aeronautical engineer by profession, Navjot put his engineering skills to use when he met Divya, a homemaker in Kuilapalayam village, Tamil Nadu, during his sabbatical.

Seeing her suffer from backache and skin irritation from washing clothes with her hands, he built a low-cost manual washing machine that requires no electricity and very little water. It not only washes but also dries 70-80% of clothes.

Priced between Rs 5,000-Rs 6,000, the incredible innovation by Navjot has bagged several grants, awards and support from corporates and non-profits around the world.

He launched his first machine in August 2018 and since then he has deployed over 150 pieces across Iraq and Lebanon, positively impacting close to 1,350 people through his initiative ‘The Washing Machine Project’. Under this project, organisations purchase machines from him and distribute them for free.

“I was working at a high-end vacuum manufacturing company when I took a sabbatical. After experiencing the village lifestyle and its problems, it did not feel right to use my skills to make products benefiting the privileged. So, I quit my job and spent nearly a year to come up with a washing machine,”.

From sanitation, electricity, water to education, all Navjot saw was a plethora of issues that plagued the village life. What surprised him more was that people were forced to be habituated to these problems.

His first innovation was clean cooking stoves that came in 2017. This was for the women who would often travel deep into the forest to collect firewood to prepare meals.

He then shifted his focus to the issues of washing clothes with hands, which is often undermined, especially in the rural landscapes.

“We often see women laughing and chatting away on the river banks while washing clothes. What we don’t see is the amount of time, endurance, energy and stamina that goes into the activity. My neighbour, Divya, had contracted a water-borne illness and skin irritation. Not just that, the activity consumed a lot of her time because of which she missed her earning opportunities. Even her daughter had to forgo her studies for some time to wash clothes,” says Navjot.

After that, Navjot travelled to 12 developing countries and spoke to over 2,500 families to survey handwashing clothes. He found that this burden is widespread — disproportionately affecting women and children, affecting their well-being and livelihood.

A year later, Navjot found himself fidgeting with spare parts of different machines in his Greenford apartment kitchen. With salad spinner as his main part, he built a prototype within two days.

“I designed the machine based on the principles of a salad spinner. It has a capacity of 5 kg per wash and a speed up to 500 RPM. It comes with a warranty of two years and weighs 35 kg. The speed-soak drum provides excellent dewatering that reduces drying time and is 75% faster than hand washing. All one has to do is put the clothes inside and turn the wheel manually with a handle,” he explains.

While Divya and other women of that village are yet to receive the washing machine due to technical challenges, Navjot has managed to make inroads in conflict-affected zones of Lebanon and Iraq where the machines are making a difference.

“Women use approximately 50-60 litres of water if they are hand washing the clothes. Moreover, they have to walk for miles to source the water and also carry the burden of filled buckets. This was causing back-breaking problems for women of Iraq’s Mamrashan Refugee Camp. Additionally, their free time is used to rest or help the kids with their studies. Women can save approximately 750 hours annually if they stop hand-washing clothes,” Navjot asserts.

At present, he has more than 2,000 pre-orders of the machine from 15 countries.

If you wish to donate a washing machine or money, you can click here.

The story has been extracted from https://www.thebetterindia.com/273082/low-cost-washing-machine-innovation-nri-navjot-sawhney/