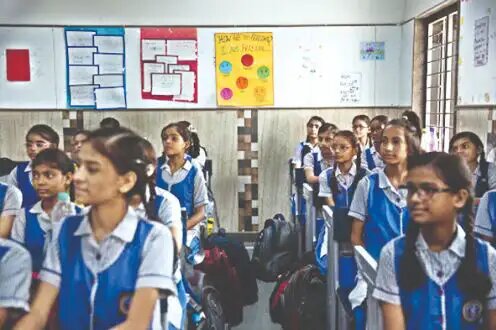 Despite some outstanding work being done by a number of officers and institutions in the field of school education, the State of Uttar Pradesh has been known for all wrong reasons. I was visiting Lucknow in the year 2017 as Secretary School, Government India to discuss an action plan for the State. The schedule was packed but this young lady, Samina Bano was insistent. She wanted time to narrate her story. I did finally relent and what an amazing story she had to narrate.

While a great deal of focus is cast on reforming the public education system, the rapidly growing sector of private schools currently catering to over half of our children is rarely discussed.

Notwithstanding the gaps filled by private schools, there is a need to acknowledge and address the serious challenge of socio-economic segregation witnessed across the classrooms in private schools. The cost of investing in equity in education outweighs the cost for both individuals and societies. Investing in elementary education for all and in particular for children from disadvantaged backgrounds is not only social justice but also economically efficient.

One of the provisions of Right to Education Act aims at equal access to education and social inclusion in classrooms by mandating every recognised private school to reserve 25 per cent seats in entry-level classes for children belonging to economically weaker sections (EWS) and disadvantaged groups (DG). Samina Bano and her organisation – RightWalk Foundation (RWF) have created a commendable feat in this field in Uttar Pradesh.

In 2013, as a young computer engineer and IIM Bangalore graduate working in the US as a management consultant with a leading consulting firm, Samina decided to return to India in the uncharted territory of Uttar Pradesh. She decided to root her organisation in UP and anchored it with the idea of public-private partnership right at the outset.

Her initial research revealed that Uttar Pradesh had approximately over 600,000 RTE seats available for vulnerable children but there were only 54 admissions across the State in 2014, primarily due to fierce resistance by private school lobbies and prohibitive state policies.

To unite like-minded professionals, RWF initiated a ‘nexus of good’ approach and focused on cooperation with communities, teachers, principals, media and supportive bureaucrats. Owing to the national media coverage, the Chief Minister of UP soon took notice and extended support while his Secretaries Partha Sarthi Sen Sharma and Amod Kumar played a pivotal role in helping RightWalk traverse the complex bureaucratic labyrinth.

Yet, a powerful school moved to the High Court challenging this provision while several personal attacks such as a civil suit, threats etc were waged at Samina. It was a David vs Goliath battle. They were experts in court battles and the RightWalk team had never even been to a courtroom. After six long months of court battles, on account of great support from the State legal team as well as key bureaucrats such as Rajshekhar, then DM Lucknow, justice eventually prevailed and they won. RightWalk led policy reform, ran state-wide mass awareness campaigns, conducted over 40 district capacity building sessions with local administration and private schools and designed ground implementation plans. This resulted in over 4,000 poor children getting enrolled under the scheme across 26 districts of the State in 2015. The news was widely covered in media and gave further push to the cause.

Vijay Kiran Anand, then DM Firozabad and later Varanasi, provided great assistance. He pulled child labourers out of glass bangle and weaver industry and got them admitted to schools under RTE provision. Thanks to officers like him, RightWalk managed to scale admissions across the state. Support of committed officers such as Pankaj Kumar in Agra, Surendra Singh in Varanasi, Kaushal Raj Sharma in Kanpur, Ranjan Kumar in Gorakhpur, Nitishwar Kumar, Ashish Goel and Manisha Trighatia as Secretaries in the state and many others enabled the RightWalk team to accomplish positive institutional transformations for a better future of children.

In the last 6 years, RightWalk built a unique partnership with the Government of Uttar Pradesh, supporting them as a project management unit (PMU). The organisation has initiated an online RTE portal in 2017 in collaboration with NIC and leveraged existing institutions of Lokvani/CSC to address the digital divide. This model has been immensely successful having enrolled over 2,20,000 EWS children into 9,000 private classrooms across the state in the last six years.

Unlocking welfare schemes and associated government funds, RightWalk’s efforts have already prompted the UP Government to spend over 250 crores on EWS children under RTE. One rupee spent by RightWalk unlocked Rs 100 of public finance to be disbursed on welfare schemes. This is the power of public-private partnership that is now geared to impact 700,000 children in the next three years under the leadership and guidance of the current Director-General of School Education, Vijay Kiran Anand who was instrumental for its success in the field earlier

RightWalk’s work extends beyond solving for access and admissions. They closely engage with private school educators and train them on inclusive pedagogical practices to facilitate seamless integration of EWS children in diverse classrooms. They have trained over 2,000 educators across nine districts of UP in partnership with UNICEF and the State Government. There is also an inclusion-centric curriculum that is planned to be shared online for more teachers to gain access.

The overall behavioural spillover of educational inclusion under RTE in UP was recently evaluated by two professors from Duke University and the University of Florida respectively. The RCT based assessment covering nearly 2,000 households across 12 districts consistently showed that children admitted to integrated schools under RTE Act have more positive attitudes toward school, better health behaviours and outcomes, and induce parents to make more educational investments. Access to better schools makes families realise the value of education and thus promotes their education-oriented behaviour.

RightWalk is now in the process of establishing a strong government RTE structure through the RTE portal enhancement and establishment of consistent monitoring and evaluation processes. The online mode allows the decision-makers to apply for reimbursement at the portal itself and manages financial aid for children in a more efficient way. The ‘Child Tracking System’ is going to enable detailed tracking of every admitted child along with their progress against the learning outcomes.

RightWalk is now in the process of establishing a strong government RTE structure through the RTE portal enhancement and establishment of consistent monitoring and evaluation processes. The online mode allows the decision-makers to apply for reimbursement at the portal itself and manages financial aid for children in a more efficient way. The ‘Child Tracking System’ is going to enable detailed tracking of every admitted child along with their progress against the learning outcomes.