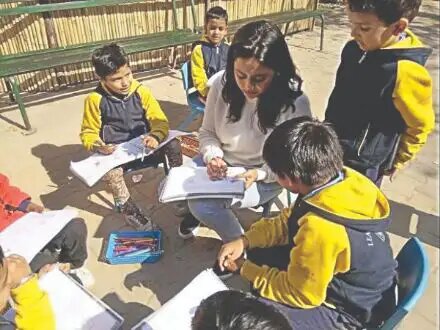 Settling into my new avatar as Secretary, School Education, my quest led me to different states, interacting with institutions, people and processes. I knew that a huge change was needed to take public education to the next level. I also knew that the change could only come when all players collaborate through a public-private-partnership collaborative model.

I moved my focus to identify organisations and people who thought out-of-the-box, who brought specialised innovation, agility and market needs skills to the table. This was achieved through various interactive workshops that were organised for the purpose of acquainting myself with what was being done in the field by various non-governmental organisations.

It was at one such workshop that Kaivalya Education Foundation and their unique concept of leadership development of government officials captured my attention.

With an established ability to work within the government system and spark change through dynamic collaborations, they were bringing in the concept of leadership through ‘self-change’, while promoting management structures, with a blend of innovation and technology to improve processes. I knew that I had found one of my innovator partner organisations. Additionally, their vision of providing equal life chances to every child in India convinced me further.

‘Kaivalya’ means – ‘Freedom from conditioned existence’. The organisation was founded by Aditya Natraj on the belief that “change in self can lead to change in the system”. Aditya dreamt of building the vast leadership potential of school educators who would then put in place robust management structures. He dreamt of a country where premier institutes would be set up, like the IIT and IIM, for educators.

Starting in 2008, Kaivalya launched the Gandhi Fellowship which placed youth from across the country within a government school in a remote village in Jhunjhunu, Rajasthan. These young people worked with teachers and headmasters in the classroom, devising innovative strategies, to improve literacy and numeracy skills of students. This innovative scaffolding model resulted in Jhunjhunu students topping the National Achievement Survey 2018.

In all it does, Kaivalya believes in tipping the scales of the public education system such that innovative education practices can be replicated by every district and sustained by each state. In the past 3 years, they have extended their interventions at a micro-level to multiple districts, and are supporting several states across the country to ensure better quality education cascades down to every child.

To implement their grassroots learnings at scale, Kaivalya began enhancing leadership, mobilising people and establishing governance structures at the district level. Through this model, each district is mandated to develop new educational practices in demonstration schools (which act as innovation engines) and deliver it across all schools. This model has been successfully adopted across 28 aspirational districts in partnership with NITI Aayog.

To sustain the development of districts, Kaivalya has collaborated with Delhi, Haryana, Gujarat, and Jharkhand to strengthen management processes and reduce wasteful man hours spent in data collection, litigation and administrative processes. It has also enabled Maharashtra, Odisha and Himachal Pradesh to improve their talent management and leadership development and build future-ready leaders.

It has been heartening to see how Kaivalya has evolved over the years, collaborating with partners across sectors and geographies. The core focal area for Kaivalya has been people and processes. State and district transformation programmes have been kick-started through partnerships with governments, policy-makers, corporates, academic institutions and diverse agencies to build future-ready leaders at the state and district level to catalyse development and innovations in schools.

Mindful of the gap between governments, corporates and communities, Kaivalya realised that civil society organisations could play a vital role in bringing all key players together, leveraging the best of each player, to catalyse change.

Even as it partners with 15 state governments across India, it is collaborating with corporate leaders like Genpact and Google because corporates can bridge the gap between aspirations and ability, by bringing innovation, agility, optimised processes and technology to the table.

Even as it partners with 15 state governments across India, it is collaborating with corporate leaders like Genpact and Google because corporates can bridge the gap between aspirations and ability, by bringing innovation, agility, optimised processes and technology to the table.

In the same spirit, through the Google partnership, Kaivalya brings cutting edge technology to benefit teachers by equipping them with 21st-century skills. Over seven lakh public school teachers across the country will be empowered to create and facilitate engaging online learning experiences by using digital tools.

In partnership with the Boston Consulting Group (BCG) and NITI Aayog, Kaivalya has been implementing Sustainable Action for Transforming Human Capital in Education (SATH-E) to build educator skills since 2018, in 12 states.

Kaivalya’s focus on building people skills and optimising processes has borne results for all to see. It impacts 87 million public school students by engaging 39,000 plus public education officials, influencing 1.5 million teachers. Schools supported by Kaivalya have demonstrated an average improvement of 20 per cent in learning outcomes over the past eight years.

Kaivalya was able to leverage the strength of their partnerships and existing network in districts with agility during the COVID crisis. Forging an association between NITI Aayog and Piramal Foundation, ‘Surakshit Dada-Dadi, Nana-Nani Abhiyaan’ was launched to ensure the well-being of senior citizens in 28 districts and scaled within a month to 112 districts. Today, in just over 100 days, the Abhiyaan has already reached out to 10 lakh plus senior citizens with 50,000 plus volunteers who continue to be actively engaged for future initiatives. And these numbers continue to increase.

True to its name, Kaivalya is constantly evolving, mindful of fast-changing global and national trends. By 2021, aligned to NEP, it aims to leverage volunteers and the support of the district administration to enable schools to equip children with 21st-century learning skills. Learning through a path-breaking curriculum with arts, physical and environmental in 28 districts is already underway. Using the framework of social, emotional, and ethical learning (L, a curriculum developed with Emory University) the curriculum is anchored on the belief that the community and the world of the child are her teachers. Through this, Kaivalya will shift the perspective of people on public education and ensure that education in post-lockdown India is ‘built back equal’, going beyond literacy and numeracy skills, creating a compassionate next-generation.

A huge shift has been made with the recognition that everyone has the potential to be a changemaker – and today, Kaivalya, with a spectrum of partners, is living its philosophy of self-change to system change, and has demonstrated itself as a worthy example of Nexus of Good.