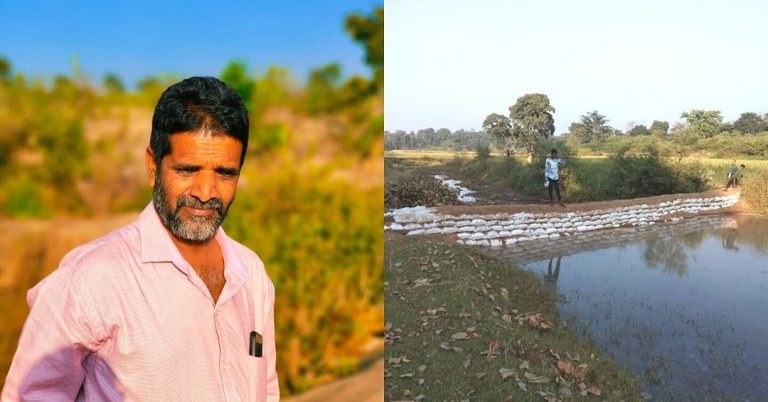 Around 25 years ago, villagers in the Khunti district in Jharkhand saw a massive amount of tree cutting carried out for development purposes. Locals say the activity was so rampant that about 100 trucks of wood were being carried every day.
Moreover, the absence of afforestation drives to compensate for the massive environmental damage led to depleting groundwater levels and water shortage. The natural water springs and canals dried up. The situation worsened, when from 2010 onwards, the villagers no longer had water to bathe, and drinking water became scarce.
Despite spending lakhs of rupees, water conservation efforts taken by the state government failed. The check dams built from concrete could not sustain under the strong water current and heavy flow during monsoons.
However, bori bandhs, an innovative concept of low-cost check dams, have turned out to be a game-changer. The idea, conceived in 2018 by Ajay Sharma, founder of NGO Sewa Welfare Society, has solved the water crisis and doubled farmers’ income. So far, the check dams built under this initiative have benefitted about 8,000 farmers across 70 villages of the district.
“As a journalist, I have witnessed the hardships faced by the villagers in the district and tried to raise their concerns through my writing. The water crisis has affected the agricultural produce as well as their personal lives,” he says. He explains that contractors often give away gunny bags used for cement transportation during construction. The same bags can be filled with soil or sand and arranged in a dam-like structure. He adds, “I thought it would be a good idea to introduce shramdaan (voluntary labour work) to them.”
A volunteer effort
To encourage villages to volunteer, Ajay gave the initiative a traditional twist. “The villagers follow a tradition called Madait, wherein people come together for a community cause and to celebrate good work done, have a meal together,” the 49-year-old says. Based on the same principle, Ajay ensured that after a day’s work, the villagers came together to eat meals to celebrate their achievement.
Bori bandhs, made on small rivers, streams and canals, are at least 30 feet wide, with a barrage-like structure made by arranging gunny bags on top of another. The biggest check dam structure built so far is 80 feet, and requires around three hours to construct. Ajay says gunny bags filled with grass (in addition to the soil or sand) prove to be better, as grass grows in water. “The strength of the dams increase, with the grass holding the soil. The wall-like structure is strong enough to last for a couple of years, and needs minor repairs, depending on the intensity of rain or floods,” he says.
The NGO was launched in hopes of attracting donations for the cause. With the help of some funds, the work began on a budget of Rs 2,000. The funds collected from donors are used to procure groceries and feed the volunteers for the day. After convincing some villagers to volunteer for the trials, Ajay built five dams in the Tapkara block during the summer of 2018. Locals benefited from the rainwater that was retained, and subsequently, other villagers from other areas volunteered as well.
“We built 118 bori bandhs in 2019,” Having seen the success, many villagers started building these dams themselves. However, due to the COVID-19 pandemic, only 40 bori bandhs could be set up in 2020.
The farmers have been reaping the benefits of volunteer work.
“The concept has turned out to be a game-changer in terms of water conservation. There is no village which has not built a bori bandh in the Mandal. Farmers have arrested water in small streams, canals and rivulets, which has allowed them to take two crops a year, as against the restriction of one harvest due to shortage of water,” says Wilson Purti, Mukhiya at Hassa Panchayat.
‘A good alternative to cement structures’
Wilson says that apart from being affordable, bori bandhs are highly beneficial. “The farmers do not remain unemployed after harvesting the first crop, and are engaged in agriculture activity throughout the year. The rainwater that used to run off earlier now gets arrested and percolates inside the ground,” he adds.
The panchayat head, who leads eight villages, says the farmers have also doubled their income. Along with traditional crops like paddy, wheat and mustard, they now also grow corn, watermelon and other vegetable varieties. “The villagers are also in a bid to recharge groundwater levels by reviving the springs,” he adds.
Ajay’s initiative also won him appreciation from the district administration and an award of excellence from the Central government’s Union Jal Shakti Ministry, under the participatory water management category at the National Water Innovation Summit 2020. He also won the SKOCH award.
In a video recorded in January and shared by Ajay, Deputy Commissioner of the district, Shashi Ranjan, says, “The cement structures suffered damage in heavy rains, and the bori bandhs serve as a good alternative. The water storage in these check dams will last until March, and farmers use the water for multiple daily uses including agriculture.”
However, Ajay feels that a lot more can be achieved with more funds and contribution of volunteers. “The hardest part is to change the villagers’ mindset. They’re often under the impression that the solution won’t have any long term benefits and thus won’t work. It’s also difficult to unite different groups for a common cause. It takes days of convincing before they agree to the task. The shortage of funds is always a problem. Sometimes, I use my personal expenses for the trips or to organise events,” he tells.
“The region is also affected by Naxalites, and if the state government supports us financially, a lot of hardships can be eased,” he says.
The story has been extracted from Low-Cost, Innovative Check Dams Help 8,000 Jharkhand Farmers Save Water & Earn More (thebetterindia.com)