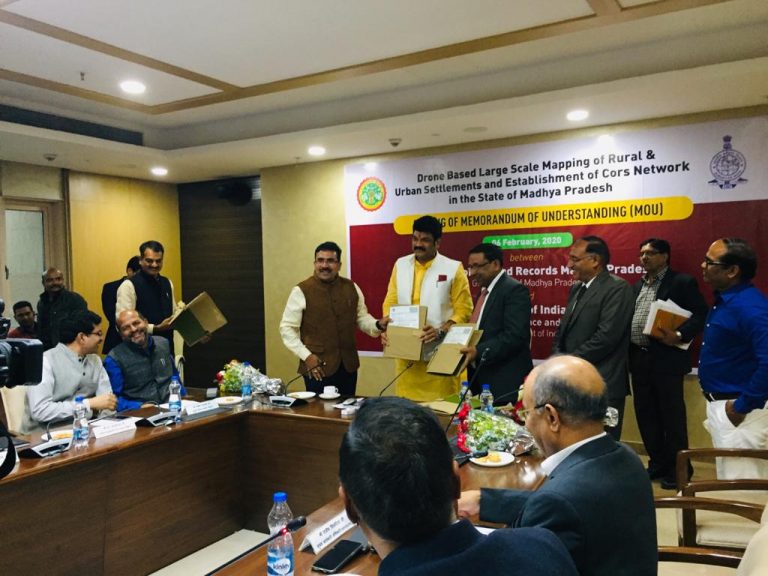 As Public services must transform to meet citizens’ rising expectations with respect to digital evolution, the digital sphere of governance has been transforming very rapidly throughout the country. Land record modernization was one of the most complicated task to roll out in the state as both digitization of legacy land records and machine-based land demarcation were big challenges in the way of transformation.
Madhya Pradesh has emerged as a pioneer in Land Record Modernization in the country, as per the latest report of “National Council of Applied Economic Research” published in Feb 2020. Based on the “Land Records & Services Index”, Madhya Pradesh has made significant progress and has been ranked as the top state in India. Presently the state is considered as a role model by other states for their land record modernization.
Though Madhya Pradesh is the leading state in the field of Land Record modernization now, it was not an overnight success and it took years with ups-downs, failures/success and learnings on the way. It has been only possible due to the due diligence and the strategic vision of senior bureaucrats along with other officers of the revenue department. Managing the various complicated and highly sensitive transactions of land records like Mutations, Partitions due to sale-purchase, diversion of land, ownership transfer within and outside the family, resolution of land disputes were some of the major responsibilities of the department. Despite putting their best efforts, officers were not able to keep track of every case and file.
The Management of legacy records was a major challenge which included managing the ownership, area, and the dispute related issues as these records are generally available in the form of paper-based Khasra and Maps in tehsil/district offices in a decentralized manner. These were extremely old historic records and tough to preserve. The traceability of exact papers in the Tehsil office and Record Room has always been a challenge for the Patwari/ Tehsildar. Further, due to these inherent weaknesses, there were possibilities of malpractices in the revenue department.
Land Records consist of various information like property mutation registers, Aks maps, sale deeds, Bandobasti record, Halka bandi suchi, revenue payment registers, and revenue case registers at various courts. These records are maintained at Patwari, Tehsil office, and revenue courts (usually tehsil and Sub-divisional offices) and Record Rooms at collectorate offices.  All these offices work in isolation and there is no seamless regular updation and communication of records.
Thus, it was extremely difficult to provide service to a user by way of providing copies of his land record, diversions, mutations, court case management, etc. Considering that, Madhya Pradesh Land Record Management society under the Revenue Department, Government of Madhya Pradesh has taken the initiatives to modernize the land record system and has formulated Modern Record Rooms (MRR) at all tehsil offices and have also introduced a Web-based Online customer Service Centre. The customers (typically farmers, owner of the property, bankers, agriculture department, registration department etc.) need to apply for the desired service through these IT centers /Online Kiosks/Portal and the desired service is ensured within a defined timeframe.
The mandate of the MPLRS is to improve the quality of the Land Records through modernization of Land Records. The MPLRS aims to take all necessary steps to implement technology solutions to promote efficiency, reduce delays, ensure accountability, ensure transparency and objectivity in the management of Land Records and related documents. MPLRS is also engaged to formulate strategies, policies, plans and assist the management of Land Records in an effort to provide efficient and prompt services to the public through multiple common access infrastructure.
How was it implemented?
The modernization of land record was initiated with the digitization of land records as the first step and more than 3 crores land records have been digitized so far. MPLRS is now in process of digitizing all 15 crores land records like RoR (Adhikhar Abhilekh, Nistar Patrak, and Renumbering list), Khasra, Khatauni, Namantaran Panji, and Revenue Court Cases, etc through modern record rooms established / in process of the establishment at 316 Tehsils of Madhya Pradesh.  The land record modernization program initiated with a traditional application had numerous challenges and limitations which were stopping the department in achieving its stated objectives. To overcome the challenges, department decided to create its own system for the land record modernization program. The pilot WebGIS solution was executed from 2015 in 4 districts of Madhya Pradesh on the PPP model. In the same year, additional 27 districts had gone live and started their services. However, this was not as easy as it was supposed to be and hence the department decided to stop WebGIS services in all 27 newly identified districts from mid of 2017 due to certain executional challenges.
The project was re-initiated with a new hope from 2018 in 31 districts as a result of strategic level decisions made by senior bureaucrats Mr. Manish Rastogi (Principal Secretory, Revenue Department, Govt of Madhya Pradesh) and Mr. M. Selvendran (Commissioner Land Record, Madhya Pradesh than). Rest of 21 districts shifted to WebGIS software in one go from 11th September 2019 under the leadership of Mr.Dnyaneshwar Patil present Commissioner Land Records, Madhya Pradesh by addressing the key challenges like capacity building and their reluctance towards the new solution. To overcome these issues, a new round of capacity building program was initiated from July 2019. He also took the district administration and public representative into confidence by giving them an assurance of effective service delivery. The launch was carried out with fanfare in each district in the presence of public representatives so that awareness about the benefits of the project can be created among the citizens. The challenges of the traditional software were managed by shifting on the new WebGIS solution and citizens started getting the land records instantly, which helped in building the positive environment and successful roll-out of this project in the state.

Growth of the initiative

Now, these Modern Record Rooms’ Legacy digitized records are available online 24X7 for citizens through the online web-based application for land record management, called MP Bhulekh portal (WebGIS). Citizens can avail the copies of these land records through Kiosks like Lok Seva Kendra’s, Tehsil IT centers, and MP Online at a very minimal cost. The department has also reduced its timeline to provide the certified copies of these land records from three days to one day. More than 1.4 crore digitized land record copies have been delivered online to the citizens so far which itself makes it is a big achievement for the department. Apart from this, a complete Business Process Re-Engineering was done for the Diversion and Land Mortgage system. This resulted in the Online Diversion and Bhumi Bandhak module to be introduced under the Bhulekh portal to facilitate the citizen through online service of these modules. More than 22 thousand beneficiaries have availed services through the Bhulekh module for diversion and 26000 thousand for Land mortgage.
In addition, the MPLRS has also developed many other critical initiatives like, E-Revenue courts (Revenue Case Management System), Land and Settlement Surveys, citizen services related to land records (on demand generation of land record documents) and capacity building within the revenue department. Also, Bhulekh and RCMS system has been integrated with other inter department services like e- registry through Sampada portal (IGRS) system, other central government initiatives and continually evolving.
Multiple rounds of brainstorming were done by very senior bureaucrats and Subject matter experts from the department which lead to the amendment of many laws under MPLRC  and also formulation of new laws to achieve the legal framework for the land titling. These were based on the changes in MPLRC, 1959 the amendment/formulation of corresponding rules are currently underway. Department has also taken multiple initiatives for modernizing its workforce and has distributed laptops to the Patwari’s to make them more efficient and IT-friendly. Initially 35 laptops have been distributed as a pilot in Rahatgad tehsil of Sagar district. On successful implementation of this pilot, the laptops would be distributed to all of the Patwari in the state of Madhya Pradesh. This will help in reducing the delays in service delivery and more efficient utilization of our human resources.
Now, Madhya Pradesh is among those few states in the country which have signed the MoU with Survey of India to establish the CORS (Continuously Operating Reference Station) network across the entire state. With the help of this technique, the demarcation /survey activity can be carried out with competence and accuracy in any kind of weather or situation and the geospatial data of the entire state can be maintained on a single platform.
The Land records modernization program is sponsored under the DILRMP (Digital India Land Record Modernization Program), Government of India. Under this program, Madhya Pradesh Revenue Department has formed a society known as the “Madhya Pradesh Land Record Management Society (MPLRS), in the year 2012-13. The society is aggressively managing this modernization program in the state.
With the successful implementation of the first phase- Land Record Modernization and online customer service, the state is now spreading its wings to achieve the ultimate strategic motive of this whole initiative – Conclusive Land Titling.