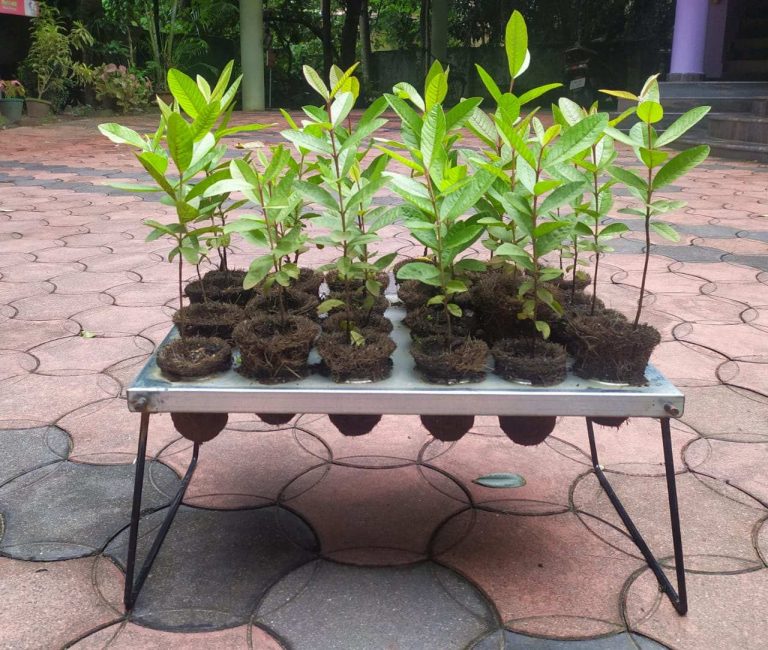 In 2018, when Meenakshi C was made the Conservator of Forests in Kerala’s Central Region, her aim was to eliminate the age-old use of polythene bags to raise seedlings, and increase the awareness among youngsters about the positive effects of greenery in urban areas.
“Every year, the Forestry Department distributes 90 lakh seedlings to schools, colleges, forest clubs, panchayats, and other organisations, on World Environment Day, and through the week of Van Mahotsav. But these seedlings are traditionally raised in polythene bags that are buried under the soil or disposed of after the sapling has been planted. This disturbed me,” mentions Meenakshi.
Consequently, from January 2019 onwards, Meenakshi and her team started testing sustainable materials such as bamboo shoots, coconut shells, and gunny bags to grow the saplings. Sadly, none of these attempts were successful. “The bamboo shoots would become fragile with continuous exposure to water. Additionally, the medium restricted the growth of roots, and would also end up damaging them during the planting stage, when they would be removed from the container. Coconut shells also hindered the growth of the roots, and besides, sourcing 90 lakh coconut shells is no easy task. Gunny bags were an ideal solution until we realised the bags needed were not mobile. They needed external support to stand upright,” says Meenakshi.
Stumbling Upon A Solution — Coir
In September 2019, while Meenakshi was still looking for sustainable solutions to raise seedlings, she got in touch with her former colleague, Sheik Hussain, who was the Conservator of Kozhikode.
“When I explained to him what I was looking for, he suggested that I consider coir containers which were gaining popularity as a eco-friendly potting medium. He was unsure if I could find them in smaller sizes for raising saplings but asked me to contact an agent in Pollachi, Tamil Nadu who was a manufacturer and dealer of coir products like doormats. They were also manufacturing coir pots but only in bigger sizes. Once I got in touch with them, they were more than happy to make coir cups according to our requirements,” says Meenakshi.
After some back and forth, the shape and size of the containers was finalised (2.5 mm thickness, 50 mm diameter, and 100 mm length), and 500 sample containers were purchased. More than 30 species of trees were planted to test the root growth of the plant, and durability of the medium.
“It was a success. Even teakwood trees which have a dominant root system grew well. The coir containers are shaped like cones and are weightless. They also have perfect water retention capacity, and the material is just right — neither too dense nor too thin — thus allowing the roots to grow unhindered. Coir is also high in ‘lignin,’ a cellulose-like material responsible for its durability. Apart from this, the containers can be planted along with the sapling, making it a completely zero-waste product and process,” says Meenakshi.
Seedling Distribution
In February 2020, a bulk order was placed to the same agent in Pollachi. Once it was delivered, the Social Forestry Department began planting seeds to prepare for World Environment Day.
Anaz MA, the Divisional Forest Officer of Ernakulam district, who was also involved in the project says, “Being the nodal bodies that supply seedlings across the state, eliminating plastic was our number one priority for this year. Coir containers fit all the parameters we had set in place in terms of weight, size, durability, and mobility. Even after it was distributed to different schools in the city, the cups had remained in shape, none of them were damaged.”
The initial plan was to distribute more than 10 lakh seedlings on World Environment Day, but due to the pandemic that was gripping Kerala, deliveries were delayed, and the department was prepared with only 5 lakh seedlings. This was distributed across 14 districts. The first distribution drive using coir containers, was a success. Meenakshi claims there were no damages to the containers during transit, nor were there any damages to the roots while planting them. Apart from that, the department had also received a positive response from those who had planted the seedlings.
“In the following months, the other seedlings were raised, and we continued receiving more containers in order to prepare for Van Mahotsav week. We safely managed to distribute 40 lakh saplings, raised in coir containers, through the week of Van Mahotsav. We have distributed 50 lakh seedlings till now,” she says.
Today, Meenakshi and her team are working on the second trial for the coir containers. “The first test was done during the months of summer when the weather was dry. Now, we are testing the container’s durability against heavy rains. If the test is a success, in the future all saplings will be distributed in coir containers thereby eliminating any use of plastic,” says Meenakshi.

The story has been extracted from https://www.thebetterindia.com/232391/ifs-hero-kerala-coir-bamboo-coconut-gunny-plastic-free-no-bags-posts-ros174/