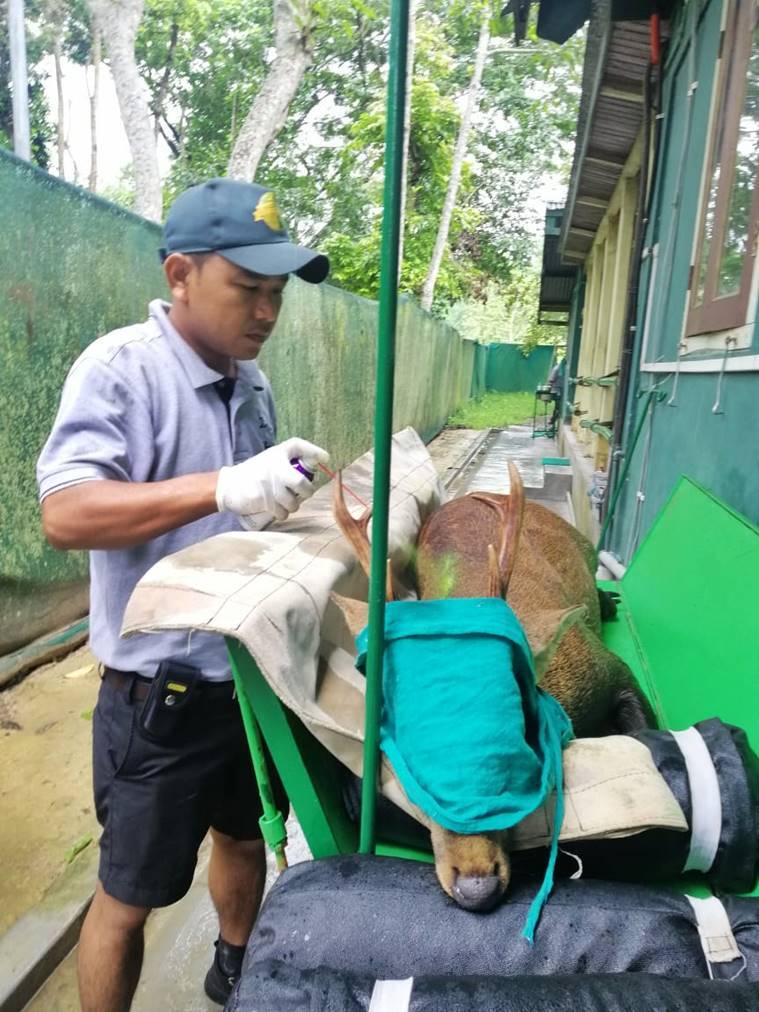 With 95 per cent of the World Heritage Site submerged and thousands of animal struggling to say afloat, meet the bunch of people who dive in to save the day.
To evade the rising water level in Kaziranga National Park (KNP), a female adult rhino along with her four-year-old calf had embarked on the treacherous journey to the Karbi Hills. However, she missed a step and fell 500 feet below to her death.
“The incident happened in an area called Hatikhuli. The rhino got stuck between two big rocks. When we reached, it was stressed out and panting heavily. Soon, it died. It was heartbreaking to see the calf just 500 meters away from the mother’s carcass,” says Dr Samshul Ali, Veterinarian at Centre for Wildlife Rehabilitation and Conservation jointly run by Wildlife Trust of India (WTI), Assam Forest Department and International Fund for Animal Welfare (IFAW).
Ali has had a busy day. After the Hatikhuli incident in the morning, he got a call from Haldibari, where a rhino calf drowned to death. Then in a third case at Salmara, his team rescued a rhino calf and brought it to CWRC in the evening for further treatment.

The veterinarian — who has worked with animals for seven years — has not gone home for the last four days.

Preparing For the Deluge
Since the floods struck Assam on July 8, CWRC located at Borjuli Tiniali, around 7 kms from Bokakhat town, is the only place in Kaziranga where injured or orphaned animals are treated. Since its inception in 2002, the centre has handled around 4,500 cases and has released 60 per cent of the animals back to the wild.
Many in Kaziranga refer to the annual flood as the ‘necessary devil’ which bolsters the Park’s eco-system every year. At the same time, it also threatens the lives of the park’s prized biodiversity. In such a scenario, an intrepid bunch of people from the forest department, CWRC, fringe villages, NGOs and civil administration join hands to save these helpless animals.

The forest department plans well in advance to counter the calamity. P Sivakumar, Director of KNP says, “We start preparing for flood right after Bihu. We hold meetings with the police, civil administration, NGOs, local villagers on counter-strategies. We carry out health check-ups of our frontline staff, ensure that drinking water facilities are in place in the camps.”

With 85 per cent of the park submerged now, boats are the prime mode of transport for the department. Sivakumar informs that there are more than 200 country boats in the camps along with 11 speed boats or bhotbhotis. There are also 50-60 vehicles inside the park. However, it is the huge manpower of KNP which helps to execute every plan on the ground efficiently. Rohini Saikia, Divisional Forest Officer (DFO), KNP says, “Nearly 1800 people are working day in and day out during flood to save our wildlife. Among them, 1400 are our own staff and rest are volunteers, eco-development committees, NGOs and villagers.”
Vehicles speeding through NH-37 have contributed significantly to the number of casualty of animals this year. As per forest department reports, 12 animals including 11 hog deer and one sambar have been killed in road accident during flood so far.
Saikia says, “We have the system of time card issued to drivers passing through the park. Many drivers caught driving above the speed limit of 40 km/h, have been fined Rs 50,000.”
Survival of Fittest
The official death toll in the park at the time of writing this report is 51. However, the park officials maintain that once water starts receding, many more carcasses might be found.
Among the animals which have died, there are 38 hog deers, five rhinos, one elephant, three sambars and four wild boars. On casualty among hog deers being highest, Dr Panjit Basumatary of the CWRC says, “There are more than 30,000 hog deers in the park. With their population being so high, so will the death toll. Also, they are nervous animals which make them more prone to danger.”
But which are the ones that survive and why?
“Survival of the fittest,” explains Sivakumar referring to Charles Darwin’s theory of natural selection, “The unhealthy animals get eliminated first. Fit animals generally survive unless it is very high flood.”
The Mantra of Rescue
About 33 new highlands constructed by the forest department along with the earlier 111 ones have played a major role in reducing the number of casualties. “However, not every animal use highlands. They are mainly used by rhinos and hog deers. Elephants and tigers mostly avoid it. In fact, a tiger has been spotted taking shelter on the rooftop of a house in Moabari”, says Dr Bhaskar Choudhury, a veterinarian working for WTI.
The inundated house was vacated by its inhabitants a week ago.
Sivakumar insists that the conservation effort this year has yielded much better result because of the involvement and awareness of people living in the fringe villages of Kaziranga. “Many locals are doing a commendable job in conservation of wildlife,” he says.
One of them is Manoj Gogoi, from Bochagaon village in Kohora, is a well-known wildlife rescuer and has rescued 25 animals including hog deer, snakes and birds like Yellow Footed Green Pigeon, Asian Barn Owl and Asian Quail during this flood. Gogoi says the mantra of rescue is one should learn when actually an animal needs rescue. “Most of the times, wild animals don’t need to be rescued. Unless they are stuck somewhere or are injured, they shouldn’t be rescued. We need to make space for them and they will find a way out.”
Source: https://indianexpress.com/article/north-east-india/assam/kazirangas-circle-of-life-how-forest-dept-vets-and-villagers-join-hands-to-fight-flood-fury-5835129/