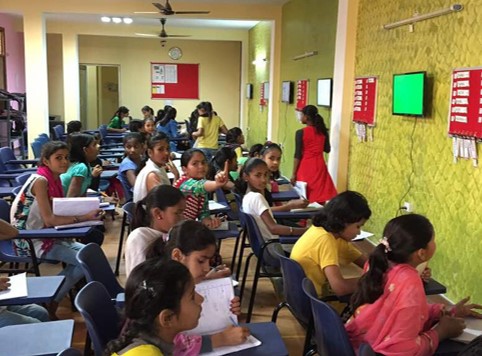 (KantLearning – An example of great possibilities, when public and private sectors come together)
Hridayesh Kant, US based NRI and software expert, thinks that he has the answer to ongoing crisis in government run education systems. He has engineered a low-cost, video game like classroom environment using cheap TVs. Idea is based on group practice in a supervised setting by harnessing the energy of students to perform all tasks while making the system as a fun learning environment.
Idea did not evolve overnight, it took four years of research effort in faraway places like Bastar, Alwar, Baghpat, Bulandshahar and many other cities. After multiple iterations, he has arrived at a simple solution which students love, and learning happens at students’ competence levels. System also removes the subject knowledge burden from class administrators.
Presently this system is being piloted at more than 100 schools in NDMC, KV and SDMC including few private schools.
Start of a public private relationship
Kant process was designed to be implemented by school staff with minimal initial training. The first government school implementation (Started in 2018 with permission from Mr. Naresh Kumar, Chairman, NDMC) turned out to be its strong validation as Ms. Simmi Sachdeva (HM, Primary School, Netaji Nagar) took the idea and ran with it. She not only implemented it at her school but is now coordinating ‘Kant Process’ implementation at all 45 NDMC schools with great success. She is now one of the biggest proponents of the system, having watched it over a year from closed quarters.
Since then, system has grown to cover more than 100 schools at NDMC, KV and SDMC schools. Similar success stories are being reported by school principals and teachers involved. Students are enjoying the system because of its gamified nature.
Initial tests conducted by KantLearning staff at some of the schools are reporting 60-80 percent improvement in learning levels over as little as six months.
It is hoped that the simplicity of the process, low-cost, easy replicability and the capacity of school staff to adopt good ideas, will allow it to spread quickly across education systems.