Joyful Saturday or No Bag Day 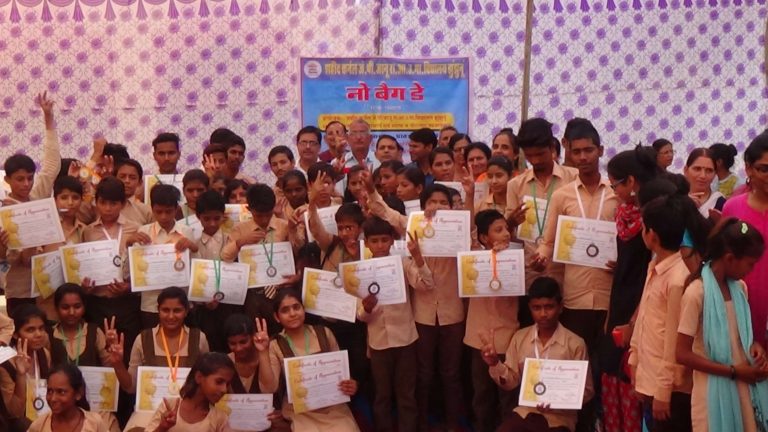 Concern regarding academic burden of students and unsatisfactory quality of learning have been voiced repeatedly in our country.
Yashpal committee has highlighted the same which stated that “A lot is taught but little is learnt or understood”. In their report of Learning without Burden 1993, which says that opportunities for children to carry out experiments, excursion or any kind of observation are very scare and textbook asking children to observe a picture of the object under the study rather than asking children and teacher to go out and observe the object in nature itself.
Patitapaban Choudhury- Batch 10 Fellow at Alsisar Block, Jhunjhunu (Rajasthan) of Kaivalya Education Foundation – A Piramal Initiative has observed many children fall in the category of “a lot is taught but little is learnt or understood by them.” He was aware of the fact that learning at school can be a joyful experience, if we change our perception about the child, show faith in his/her creative instinct and their capacity to construct knowledge out of their experiences can lead to a Joyful Learning environment for students.

During the fellowship journey, a process named Classroom Immersion (CRI) he observed that students were very eager to draw and paint their own world which they visualize. So he has started “Creativity Classes” where each student has an opportunity to draw something or contribute something for decorating classroom and walls. Total 286 students have participated in this process & there was a shift in the behavior of few teachers who showed resistance earlier and it was possible when they saw their kids drawing and decorating the walls of the school and classroom. Later, every teacher took responsibility to conduct these activities frequently in their classes. He has observed that if we provide opportunity to children to share their day to day knowledge and experiences of the world around them, the trees that they have climbed, the fruits they have eaten, the birds they have admired. The pace of their learning, their participation and ownership in the process of learning gets enhanced. He has also observed that children of class 2 have a rich language base but rarely anyone ask children to talk about or refer to the world outside the school.

In another process of fellowship named Community immersion (CI) he started a 14 days sports development camp with objectives of team building, engaging in decision making process, and creating a joyful learning environment. The turn up of student was low during first two days (2 students only) followed by high for rest of the day (28+ students daily). The observation were more fine-tuned during engagement with sports development camp. He understood that participation of all children in free play, informal and formal games, Yoga and sports activities is essential for their physical and psycho-social development. The range of abilities as a result of games, sports and yoga will improve stamina, fine gross motor skills, self-awareness, control, and coordination. Simple adaptation of playgrounds and rules help children understand importance of norms and their significance in establishing processes.

He has understood that there is lack of spaces for children to share their creative work. His experience suggest him that, when children speak, they are usually answering the teacher’s questions or repeating the teacher’s words. They rarely do things, nor do they have opportunities to take initiative. A space need to be developed that enable children to find their voices, nurture their curiosity—to do things, to ask questions and to pursue investigations, sharing and integrating their experiences with school knowledge.
Based on the learnings of first year he and his teammates of Jhunjhunu conceptualize the idea of No Bag day with an objective “to create a space for channelizing the energy of children by opportunity to express self in a joyful learning environment”.

Further to this the focus was on –

A) Prioritizing the opportunities for children where possibility to explore day￾to-day resources around them are more.
B) Appreciate the creativity of children and encourage cultural values
C) Children are able to understand the importance of listening, expressing self and communication, Furthermore, the space was also utilized to highlight the talent of kids by engaging community and collaborating with them in the process of child’s learning.
A study cum survey conducted by the team of Gandhi fellows of Jhunjhunu Cluster was part of phase of idea conceptualization. The focus was on socio emotional learning of children. Team has found that there is a need to create fear-free & Joyful learning spaces.
The spaces for child creativity need to be nourished. The absence of these spaces may lead to resulting in the absentees of child in schools, slow learning pace of a child etc. Based on this survey the activities of no bag day was designed. The key principal during designing the activities were to give space to children’s experiences, their voices, and their active participation. The activities were planned considering children’s psychological development and interests with the idea to respond to physical, cultural and social preferences. Thus, the activities are focused around drawing, stimulating, playing, acting, singing, debates, music, drama, speaking and narrating, self-identification, self-assessment. Primary classes specifically Class one and two children gauge with painting their own world and class 3 to five are engage in storytelling, BAL Geet and drawing. The upper primary and secondary classes are involved in spell bee, letter writing and essay writing. The children are get involved in activities like Kabad se Jugad (best out of waste), creating their own stories and poems, writing an incident, which they like, or dislike, quiz etc. No bag day was implemented in Alsisar, Jhunjhunu and Chirawa block respectively. Total 5220 children and 386 teachers from 46 schools covering the area of 16 panchayat elementary education officials have participated in this process. The idea has appreciated at various level from district to state. State has expanded this idea in all government schools across state in form of joyful Saturday. This initiative has given a space to children to share their own thoughts and engage in expressing self. On the same time, it has also created a challenge in front to teachers to think innovatively and design plans in such a way that each child engages with the activities and learning process and at the same time enjoys and develop her skills like creativity, communication, values, utilization of resources and working in a team.