Inclusive Ethos at SBS: The Wind Beneath The Students’ Wings 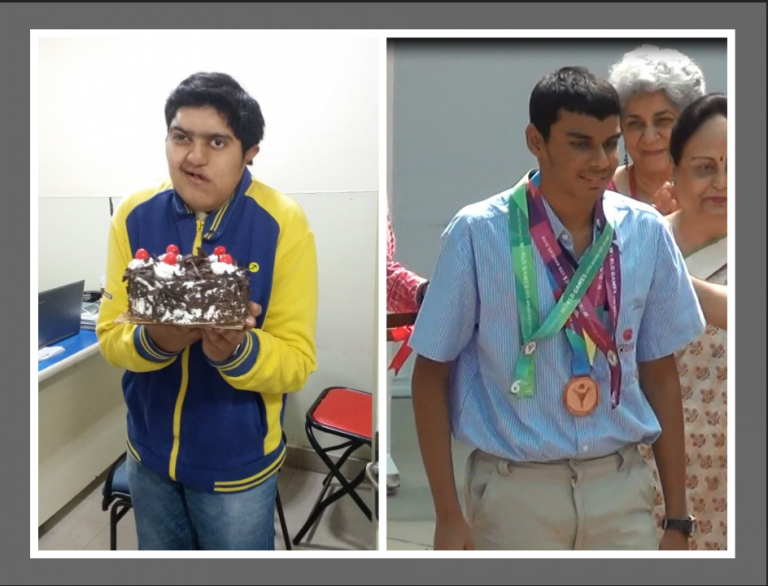 SHIVA DUTTA
A childhood fraught with surgeries and major hospitalisations, founder student Shiva Datta found his niche in Step By Step school’s (SBS) Centre for Special Education (CSE). Born with a complete bilateral cleft lip and palate, he underwent a total of thirteen reconstructive surgeries that have left him with a facial palsy on the left side along with speech and feeding issues.
Though his adversities are many, Shiva continues to bravely tackle them head on. From Akshar in Kolkata to Step by Step School Noida, he was fortunate in finding a nurturing learning environment with caring professionals along the way. When he joined the academic program in CSE in 2008, he faced the daunting challenge of being part of a big school where he was the odd one out with a facial anomaly. But the inclusive ethos of SBS helped to equip him with the ability to hold his own and participate in whatever came his way. Creative teachers helped to spark an interest in jewelry making and fabric printing. Steady counselling support tried to bridge communication and social gaps. He honed his computer skills, and used it as a medium to successfully give examinations. With the support and guidance of the special educators he successfully passed his class X through National Institute of Open Schooling (NIOS). When he left SBS and moved on to a different arena in 2016, he could look back to a truly holistic school life.
He joined Shaurya Vocational Centre in 2016. At present, he is studying for his Senior Secondary NIOS examinations, learning photography and developing his Photoshop skills.
YASH SINGH
Yash Singh joined Step By Step School (SBS) in 2008 and was admitted to Grade 1. He came with the diagnosis of Autism. Till Class 5 he continued to study in the mainstream classroom but then he began to find the academic pressures very challenging. Since this was affecting his learning, self-confidence and morale, the school and parents took a joint decision to shift him to a class in the Centre for Special Education (CSE), where students are in small group settings. This new environment, under the care of special educators, facilitated his learning, as he was now able to function at his own pace. Furthermore, he was also able to devote more time to his passion – swimming.
Apart from excellence in academics, SBS also provides excellent opportunities to students in a plethora of extra-curricular activities like physical education, visual arts, performing arts to name a few. Here, the miracle of Sports happened to Yash. Sports played a major role in Yash’s life. Yash’s love for water and his potential to do well in this sport was recognised by one of the swimming coaches in school. It was a turning point in Yash’s life. He trained and practised with great zeal and enthusiasm. His sense of discipline, need to excel and his single-minded passion propelled him to give his best each time he went for a competition. The whole-hearted support of the school also motivated him to go on.
Being the only differently-abled child competing in both mainstream and Special Olympics competitions boosted his confidence. At the age of 13, he represented India at the Special Olympics World Summer Games held in Los Angeles in 2015 and won India’s first medal of the event. Participating in such a huge sporting arena presented Yash with a myriad of social and cultural experiences, which enhanced his holistic development. This experience broadened his socio-cultural perspective by providing him an increased awareness of different ethnicity, diversity, culture, music, cuisine etc. There was a visible positive change in Yash. Giving interviews, attending felicitation ceremonies and being an “In-feature” on NDTV, exuberated his confidence level.
School taught Yash to be independent through the various camping trips and excursions each year. Each camp took him a step ahead towards being independent and empowered him to become self-reliant and sports put him on the path to becoming a confident and independent person. Yash had a wonderful experience at SBS. He has grown into a well-rounded young man with strong character, self-discipline and high values. He greatly benefitted from the conducive and inclusive environment provided by the school.
In 2016 his family relocated to Canada. The good base of skills, which he had developed at SBS, helped him in adapting to this change in his life. Being on the High School Swimming team and winning at various competitions at different levels gave him the necessary boost of confidence and respect from his fellow team members.
He now swims regularly in a Swimming club and is being coached by Canadian National and Olympian swimmers. He is also on his school’s Cricket and Bowling Team. In 2017, his school cricket team was awarded the Mayor’s School Cricket Excellence Award. He also participates in the Track and Field events. He now wants to explore other avenues to learn new skills. His first step in this direction started with being a Volunteer at the local library. The dedication and sincerity of his work has earned kudos from his colleagues there.
Presently, he is in Grade 11 and is majoring in Hospitality and Tourism. He wants to pursue a career in this field and lead a successful and independent life.
In his words, “Pursuing swimming helps me to achieve my dreams by focusing on my strengths and overcoming my weaknesses. It teaches me an important lesson, to do my best as it is not about winning but being brave in the attempt…”