IAS Vijaya Jadhav: An Officer And A Gentlewoman 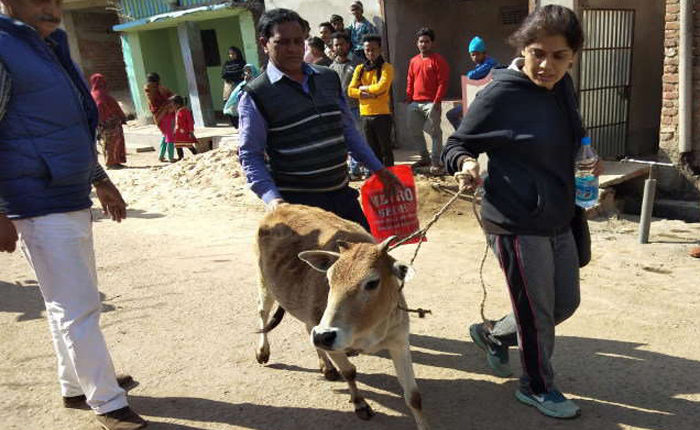 Giridih: Four months is just not enough for any officer or politicians to bring about a major change in the outlook of a city.  Especially, when the city has once been listed as one of the top 5 most backward districts of India.
But thanks to the sustained raids being conducted almost every alternate day to rein a control on inter-state sand mafias, illegal firecracker sellers, adulterated food manufacturers, noise polluters, and anti-encroachment drives towards making the city cleaner, increasing the revenue of the municipal corporation and raid on illegal cow slaughtering are some of the work being spearheaded by Indian Administrative Service (IAS) officer Vijaya Jadhav in Giridih district’s township.
A 2015 batch IAS officer, Jadhav had taken charge of her duties in the month of October, 2017, as the Sub-divisional Magistrate (SDM) of Giridih. And 10 days back, she was also given additional charge of the Giridih Municipal Corporation. She is now its executive officer.
So, how challenging is it to work in Jharkhand? Jhadav, is originally from Pune, Maharashtra. “I see it as an opportunity to perform better. Actually, Jharkhand is not as developed a state as Gujarat or Maharastra. These states have a system and infrastructure, which is lacking here. So there is a lot of work for the state and for the residents of Jharkhand. And we as officers have to play a pivotal role in building a robust system for the state to function,” the IAS officer replied to eNewsroom.
However, Jadhav, the IAS is well aware of the fact that bringing about this change will not be an easy task. “Departments here lack a systemised way of working. In most departments, the work culture is missing. There is also a huge gap in training and orientation of the employees. So I have to first uplift the skills of my subordinates before performing some task,” Jadhav admits.
On the issue of corruption, when asked, it is a fact that there is rampant corruption in Jharkhand and it is often alleged that without bribe no work gets done, the in-charge executive officer of the municipal corporation claimed, “I have zero tolerance for corruption. I can understand delay in some work, but if I get any complaint about work being delayed just because of bribe, I do not tolerate it. I have made this message clear to everyone here. Also, corruption is an ethical call for everyone, I can’t comment on others but I will never compromise on my integrity.”
Recently, Jadhav along with twenty other officers have adopted a panchayat each, to develop them.
On being asked how she will insure that there would be no hunger deaths in her panchayat—Jashpur, which is located on the border of Giridih block and has a population of 5500 population. It has good tribal population, she replied, “Three steps needed to be taken to ensure it. Each family should have a ration card and gets food-grains on time. The families of these panchayats will get covered under social security pensions and will be empowered with some skills to produce products which can be marketed individually or through self-help group (SHG)s.”
She then added, “We have created a database for every single person in my panchayat, organised a ration card camp and initiated other necessary steps for the development of the panchayat. I want to make sure that no one dies from hunger in my panchayat.”
On January 13, a tribal woman Budhni Soren had died of hunger in Tisri block of Giridih district. Her death was the seventh hunger death in Jharkhand. However, each time the respective administration officials have maintained that the deaths were due to illness and not starvation.
“We should be ashamed, if somebody dies of hunger,” stated the young officer without any hesitation, while speaking on the issue of starvation death.
Jadhav, had to face resistant on two occasions during her actions – ensuring no playing of loud DJ Music during Saraswati Puja and raid in Quraishi Mohalla for illegal cow slaughter. Despite protests, she handled the situation well and got rule of law implemented.
“An officer should not have any religion. It is a personal thing. I believe that the administration should be secular,” she pointed out.
No wonder, vernacular media has started branding her as Lady Singham. To that she smilingly pulled out a small piece of paper, which she had received from a school girl. The scribble read, “Mein Apko Ek Upnaam dungi, Aprajita (I would like to nickname you, Aprajita – the one who never gets defeated).”
Source: https://enewsroom.in/ias-vijaya-jadhav-officer-gentlewoman/