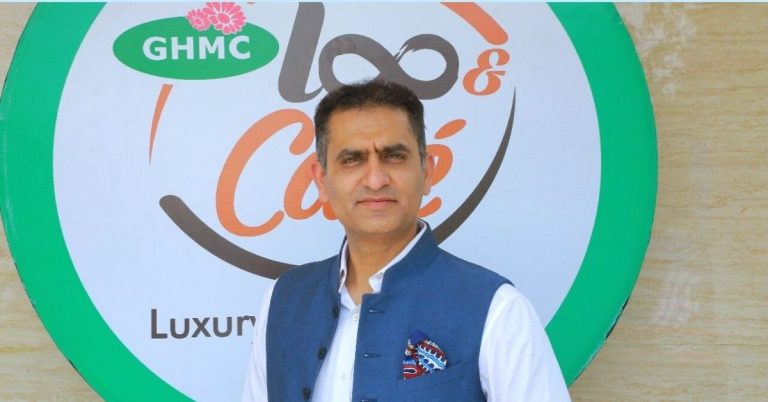 The thought of crossing a public toilet while walking in India arouses feelings of nausea and disgust. Closing your nostrils with your fingertips might still not be enough to avoid the horrifying and unbearable stink of ammonia.
And despite all your efforts to block out the smell, a passing whiff is enough to make you want to gag.
But imagine standing beside a public toilet while munching on your favourite delicacy, with the occasional fragrance of flowers spritzing through the air.
Hyderabadis don’t have to imagine this as over 200 loos, mushrooming in various parts of the city, have made the experience of using public toilets a pleasure. And it’s all for free.
The Loocafe conceived by a Hyderabad-based startup, Ixora FM, is transforming public toilets and promoting its use, one loo at a time.
Toilets get a makeover
Abhishek Nath, the founder of the startup, says that Loocafes are made from recycled shipping containers fitted with “hi-tech technologies”. “The technology ensures live tracking of hygiene, ensuring there is no stink with the help of sensors and informs the housekeeper if the water levels in the tank get low,” he says.
The toilets, which are separate for men, women and specially-abled persons, are also monitored round the clock by a team of professionals from the control centre. Vertical green spaces with fragrant flowers and plants act as a natural curtain around the premise to prevent vandalisation.
With almost two decades of experience in managing hospitality for hotels and malls across India, Abhishek feels the most painful part is to deal with public toilets. He says, “There are public toilets but they are not very inviting because of their poor hygiene conditions. It is easy to build a toilet but difficult to maintain and create a sustainable ecosystem to churn costs invested in them.”
To earn a revenue, a café next to the loo offering lip-smacking snacks and drinks is set up. The profits generated from the sales are used to maintain the operating costs of the loos, which are free for use to the public.
Promoting the use of loos
“Absence of good public toilets during long road trips pushed me to think about bringing cleaner, friendlier and easy-to-use toilets. We want to break the notion of avoiding public loos,” Abhishek says, describing his motive behind transforming public toilets.
Abhishek says that after the first toilet was set up, loos of varying sizes, from 20×8 feet to 4×5, are coming up across the city. He adds that about 200 to 1,500 people visit each toilet daily.
The loo facility is established in a public-private partnership (PPP) model. The understanding is that the Greater Hyderabad Municipal Corporation (GHMC) provides the space in its jurisdiction and the structure is set up by the startup.
KS Ravi, Assistant Medical Officer of Health at Greater Hyderabad Municipal Corporation (GHMC) says, “The footfall of visitors near bus stations and airports is good. People prefer using these toilets rather than the other public loos in the area.”
Ravi says that the users also request certain medicines or items of daily needs in the toilet.
Speaking of the challenges, Abhishek says, “The pavement, footpath and the location to set up the loos have to be chosen carefully. There may be people who do not want a public toilet in front of their homes or housing societies.”
He adds that special care is to be taken while using the equipment considering the wear and tear. “We have learned and improved a lot in the past year. We have dedicated team surveys, maps to understand the psyche of the users in a particular area. Accordingly, the materials are chosen to build the toilet,” says the 40-year-old.
What’s next?
Abhishek says many new technologies like solar power for electricity, bio-digesters to treat human waste are now being tested for their use in the loos. The objective is to make toilets off-grid from the sewage lines and treat human waste into a useful “nutrient-rich product”. Besides, rainwater harvesting and waterless urinals are undergoing experiments in some parts of the city.
“A prototype having UV strips allows alkaline water to clean the bacteria in the toilet. This will soon be introduced in the Banjara hills Loocafes,” he adds.
Speaking about other cities, Abhishek says that one Loocafe has begun operations in Srinagar. “There is another one coming up in Chennai. Talks with other cities like Bengaluru and Pune are in the pipeline,” he adds.
The story has been extracted from https://www.thebetterindia.com/244124/hyderabad-startup-loocafe-ixora-fm-abhishek-nath-ghmc-public-toilet-innovation-him16/