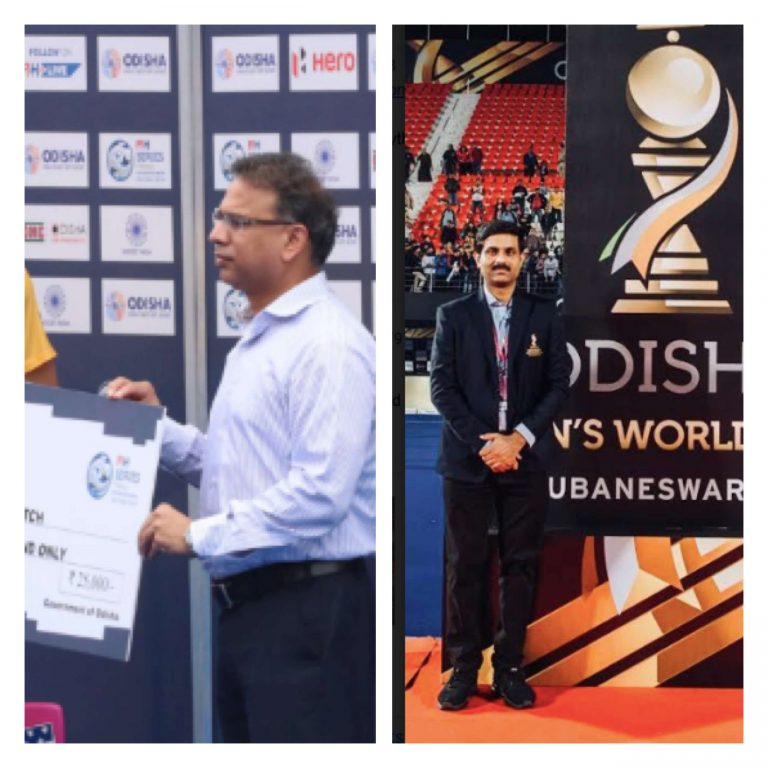 Odisha is increasingly being referred to as the ‘Sports Capital of India’ which is fair enough. The state is putting exemplary focus on sports and has organised events such as Asian Athletics, Hero Super Cup, ISL matches, Asian Rugby, Hockey League, FIH Series Finals, Commonwealth Table Tennis Championship and the biggest of them all – the Men’s Hockey World Cup in 2018.
The successful hosting of Men’s Hockey World Cup has put Odisha on the global map and the State since then has received global recognition and plaudits. Odisha Sports also signed MoU’s with industries and eminent sports personalities in November 2018 – Athletics is in partnership with Reliance Foundation, Football and Swimming with JSW Group and AIFF, Badminton with Dalmia Bharat Group and Pullela Gopichand, Weightlifting with Ahluwalia Group and TENVIC Sports( Anil Kumble), Shooting with Aditya Birla Group and Gagan Narang Sports Promotion Foundation, and Hockey with Tata Steel and Tata Trusts. Odisha is now poised as a powerhouse of sports with many such international events lined up in the upcoming months.
Two Indian Administrative Service (IAS) officers who are leading and executing the vision of promoting sporting culture in the State are Mr. Vishal K. Dev and Mr. R. Vineel Krishna.
Mr. Vishal K. Dev, a 1996 batch officer currently serves as Commissioner-cum-Secretary, Odisha Sports and Tourism.  An alumni of IIT and IIM, he has held several other important portfolios in the state. About his ongoing stint with sports, he says: “From the very beginning, after seeing our athletes do well in both national and international events and especially in Hockey, we knew that sports was something we really needed to give a facelift in the state. We decided to work on a good policy and the first thing which came across was the Asian Athletics Championship.  We executed the event in 60 days from scratch as the original state which volunteered to execute it backed off. That was the starting point of our bonding with sports as we knew we could pull off anything related to it. We became the first state in the country to sponsor the National hockey teams as hockey is the most popular sport of the state. We sponsored training of our athletes like Dutee Chand and Shrabani Nanda to train abroad. And the world now knows about their achievements. We have further provided them with jobs.
Post the Hockey World Cup, Odisha for sure has become one of the top choices for any international sporting event. The state is a preferred partner for various sporting clubs and Federations too.  To achieve these significant milestones, we had to step up our executions as per world standard and we did. We had to think out of the box and travel and explore. For the Men’s Hockey World Cup , we drew inspirations from the Women’s Hockey World Cup in London and Commonwealth Games at Goldcoast. One thing was sure from the beginning – that we wanted to host the most spectacular and engaging Men’s Hockey World Cup 2018.  And today I can proudly say that we managed to achieve that goal.
Hosting high profile events also demanded coordination and synergy between different creative agencies and Government Departments. However, in spite of all odds, collectively we have been successful in putting up great tournaments; be it the HWC 2018, FIH Series Finals or the recently concluded Commonwealth Table Tennis Championships. Now the next big thing for us would be the FIFA U-17 Women’s World Cup next year in Bhubaneswar.”
As per tentative figures collated by Odisha’s tourism department, the state received 1.61 million and 2.22 million domestic tourists in November and December 2018 respectively, upto 60 per cent higher than normal. Foreign tourists also arrived in higher numbers in the two months with an average monthly arrival of 15,000, higher by around 50 per cent.
Whether the sporting events, contribute to tourism, he says, “Tourism is the direct beneficiary of sporting events. The statistics speak for themselves. Besides that, it is Odisha that has pioneered the concept of ‘Sports Tourism’ in the country and our campaigns have been received well globally.”
Mr. R. Vineel Krishna, a 2005 batch officer and also an IIT alumni, serves as Director-cum-Additional Secretary, Department of Sports and Youth Services, Government of Odisha. On the growth of sports in the State, he said, “We have successfully hosted sporting events of national and international repute. These platforms besides promoting a culture of sports in the State, inspire budding and aspiring talents to pursue their dreams and achieve their sporting goals. Collectively, we have created an ecosystem that will enrich our athletes and further our sporting endeavours. We have many event and infrastructure projects underway which will further strengthen our position as the Sports Capital of the country.”

He further stated, “We are aware besides hosting big events, we need to build the grassroots and build a pipeline from grassroots to HPC. For example – Abhinav Bindra Targeting Performance (ABTP) is a part of the seven to eight initiatives we have taken. It’s a unique effort where we have tried to bring in a sportsperson or a management agency and a corporate because many corporates want to be involved in sports but don’t know how to do it. While the government has an advantage of creating infrastructure, we are not good at running coaching programmes. We are trying to get all these three factors together.”

“The state strives to find promising young athletes, train them efficiently, and help them build their skills by accumulating a wealth of experience in domestic competitions. Further, with the evolution of a social media-savvy world, it is also essential to align our social media campaigns with our sports initiatives to garner higher traction and engagement with fans and followers and the overall sporting community. Combining creativity with content across our platform have enabled our athletes and events to reach a wider audience across the globe“, he added.
Odisha Sports boasts of one of the most digitally forward government sports department in the country. It has 63.3k followers on Twitter and 476k on Facebook.
Interestingly, bike riding has also become the focus of attention as an environmentally friendly sport, and the number of cycling clubs has increased accordingly. A vast network of bike paths has been established across the state and some are work under progress.
A glimpse into the sporting achievements of the state –
-Odisha is the only state to sponsor all the National Hockey teams.  Odisha’s name don the jerseys of both the men’s and women’s teams. The state was also the sponsor of Hockey India League team Kalinga Lancers, which won the tournament in 2017
– Odisha Sports signed MoU’s with Industries and eminent sports personalities in November 2018 – Athletics is in partnership with Reliance Foundation, Football and Swimming with JSW Group and AIFF, Badminton with Dalmia Bharat Group and  Pullela Gopichand, Weightlifting with Ahluwalia Group and TENVIC Sports( Anil Kumble), Shooting with Aditya Birla Group and Gagan Narang Sports Promotion Foundation, and Hockey with Tata Steel and Tata Trusts.
– Abhinav Bindra Targeting Performance Centre at the Kalinga Stadium is already operational just months after the State signed the MoU
– Odisha Sports has also signed a MoU with All India Football Federation. As per the MoU, the Government of Odisha will act as the host of the AIFF national team camps as well as of the home of Indian Arrows.
– Odisha Sports organised India’s First Tribal Sports Meet in 2017
-Odisha Sports organised Asia’s First Sports Literary Festival – Ekamra Sports Literary Festival with star sportspersons in presence like Ben Johnson, Ajinkya Rahane, Aakash Chopra, Rick Charls worth, Dhanraj Pillay, Dilip Tikray, Stephanie Rice among others.
DSYS support to athletes
Meritorious sportspersons are conferred with cash award considering their level of performance/achievements at National and International level. During 2018-19, 157 sportspersons have been felicitated with cash award. Financial assistance is also given to sportspersons of the state for undergoing long term coaching course. During the year 2018- 19, financial assistance has been sanctioned for 47.
The state’s highest sports award, the Biju Patnaik Sports Award is given every year in five different categories. The quantum of cash award ranges from INR 0.50 lakhs to 3:00 Lakhs.
Financial assistance is provided to sportspersons seeking financial help for their participation in International Competitions & these are considered at Government level for grant of assistance. During the year 2018-19 financial Assistance was sanctioned to 12 sports-persons.
Sports Policy
Department is developing a basic framework based on our mission, vision and specific targets. We’ll conduct stakeholder workshops to details each aspect of the policy. Aim is to create a practical and implementable sports policy.