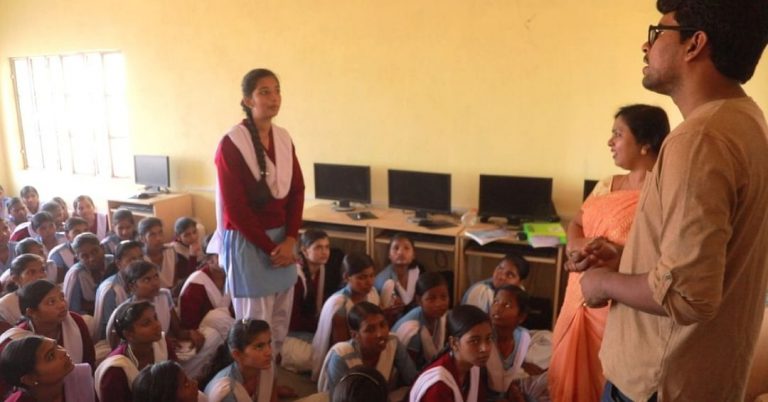 Eckovation is a social learning platform started by IIT Delhi graduates Ritesh Singh and Akshat Goel. Started with the aim of taking quality education to children from underprivileged and/or rural background, Eckovation bridges the gap between home and school and also brings students in touch with teachers, irrespective of their financial background. It encourages active student and teacher participation, while building conceptual understanding through animated and interactive video lectures.
An article about Eckovation, it led to a ripple effect and has today resulted in the launch of an education program that is impacting hundreds.
“The Better India had covered three stories about Eckovation. One of them was about an Eckovation teacher, Sweta Singh, who was responsible for teaching 800 children in her village Chapra, through our app. This article was read by many and soon we had 30-40 teachers on board. This was very helpful because we were still in our start-up phase,” says Ritesh.
“Gradually we saw the massive impact that these articles were creating. Mr. Kundan Kumar, the District Magistrate of Banka district in Bihar read the article and called me to inquire about the programme. With him, we started the Unnayan Banka Project because Banka was a district with a very low school pass percentage. Post the implementation, we saw a considerable improvement in the learning outcomes of children”.
Currently, the Unnayan project has been implemented in 8 states namely Bihar, Jharkhand, Arunachal Pradesh, Assam, Odisha, Uttarakhand, Gujarat and Rajasthan. They are now covering about 10,000 government schools and 50 lakh children. The project is known by the name Unnayan in Odisha, Uttarakhand, Rajasthan and Arunachal Pradesh, Gyanodaya in Jharkhand and Abhiyodaya in Assam.
The Unnayan project aims to deliver quality education through the integration of technology with a focus on ensuring continuous monitoring and accountability in the public education system. From Monday to Saturday, across 143 senior secondary government schools in the district, students of Class 10, watch videos and slides cast on a television screen, for various subjects like science, maths and social studies up to 90 or 120 minutes.
The videos are kept very interactive, which ensures a good degree of attentiveness from the students. After the end of these video interactive sessions, students are given OMR sheets to fill up with five questions like a pop quiz. Instead of correcting it all by themselves, the teachers give students each other’s answer sheets and ask them to evaluate them. The results are then uploaded to the Eckovation app. In addition to these daily tests, and depending on the subject, teachers conduct a 30-mark baseline test every Monday to assess what a child knows or can do at a certain point in time. The third part of the model is Doubt Discussions. If the students face any doubt at any point of preparation, she can discuss her doubts with a team of experts on Eckovation Platform.
This Teacher’s Day, they launched the Unnayan Bihar project, inaugurated by Chief Minister Nitish Kumar. The Better India article was shown to the Chief Minister as well as all the guests who had come in for the inauguration ceremony.
The story has been extracted from https://www.thebetterindia.com/205601/how-one-articles-ripple-effect-helped-this-project-impact-50-lakh-students/https://www.thebetterindia.com/205601/how-one-articles-ripple-effect-helped-this-project-impact-50-lakh-students/