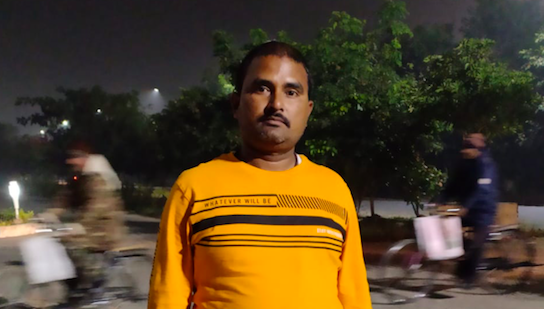 The Tale of a Self-made ‘Arvind’
Everything blue in my cabin is an epitome of work day blues. Days in and out, newspapers lie unattended and files hardly looked at. Then, one fine day I run into Arvind. This big bellied, half-bald, dark fellow draped in his regular orange T-shirt, was staring at me with amazement. Maybe I was too young at age to be in a government sitting. He however explained that some R&R saheb sent him in for an interview. I was not a recruiter since ever, so stated he is knocking wrong doors and must meet the ‘concerned’ executive. Just as I pretend to look at my newspaper, I find him standing his ground. Maybe he needed a job and was desperately finding a way-in through an insider. Just as I was about to rephrase my case, he grinned with some charm. I soon realized I was about to budge away my CSR success story.
So I am a PR guy working for NTPC- A Maharatna PSU indulged in the business of generating electricity. Interestingly, NTPC with a large cap on CSR is currently finding ways to publicize it effectively. My job is to ensure that the good is highlighted, and what’s better than finding good within four walls you stare each day, without any effort.
Curtain-up…
12 years back, Arvind was a common man in search of an ordinary job. Like many in that generation, he was dreaming money and heaps of it. Though family and relatives were keen on finding conventional ways to make is possible, he, more so than anyone, knew exactly what he needed to do ever since NTPC had declared to set up a plant at Barh. Barh: A town in Bihar situated 70 km from the capital Patna. As the old saying goes, ‘It does not take long before fortunes turn’. So they did for Barh, once NTPC got it’s back; and the same goes for Arvind.
Back in 2009, Arvind came up with a business plan for transportation. In February, he bought his first vehicle and applied for Departmental transportation Tender at NTPC Barh Project. He who was a mere sapling in the industry with one vehicle in his stride, today claims ownership of 16; 11 of which serve NTPC Barh. Yes, fortune favored the brave as he procured tender the same year his business was born. Since then, there has been no looking back.
For Arvind, an honest vendor known at Barh for his energy and prompt response to service issues, life was not easy back during years of graduation. All around him, there were peers pushing him to apply for dangling government jobs. His father too, like typical Indian parents, was inclined toward a stable, long term job…and adamantly against entrepreneurship of all sorts! He struggled to convince people, most importantly his family, to let him start the business he had been dreaming of since school days. More so, besides acceptance, some bootstrapping was needed like most entrepreneurial stints; and father like most guardians of the home made it a point to spend money only on errands. Any investment in trade for an Indian service class family is like a walk on ember. Thus it needed some Push marketing and a lot of convincing.
To persuade the family, he began odd jobs to earn his initial investment soon after graduation. Though it would take long for the earnings to suffice, he struggled for months just to express solidarity to the cause. Biting the dust each day at roads, galleries, parks, repair shops, he’d return home at night all miserable but #ziddi. After months of adversity, the rigid but dutiful father, concerned about his educated son doing unskilled jobs all day, gave both his will and finances for reaping the long sown entrepreneurial dream. A gleaning white Mahindra Bolero was bought. Arvind would now take it to NTPC and drive it himself till he gains enough traction to hire drivers on his own.
And then, Arvind took a vow. He’d not just earn his father’s hard-earned money back, but scale his business to new heights. To his pleasure, it didn’t take long for that to happen. In 2013, bypassing all the initial struggle, he earned the ownership of 5 vehicles to serve different departments in the Project. And just 3 years later, in 2016, he had it all: Own house, own land and the ownership of 16 vehicles in totality. The service has been smooth and consumers are satisfied- Just the ingredients of a successful business. And he means business, whenever his drivers (Yes, he has hired a handful) nap at peak hours.
Arvind tells how having an elder brother helped him initially. He who was youngest in the family was guided by the carbon copy of his father. Arvind has 3 kids, all of whom are fond of their uncle. Interestingly, when the start-up idea erupted, he was against it more so than anyone. There were times when father would budge in but he would ensure that Arvind works hard before gaining acceptance. Later, he himself went on and played his part in convincing the entire family in favor of his sibling’s dream.
The turnaround has been gradual, but Arvind has lived happily ever since NTPC got his back. However, after all these years, he says there’s so much more left to achieve. He dreams of starting a full fledged travel agency soon. Hence, an ordinary man with extraordinary determination, today sets example of an entrepreneurial miracle.
Curtains
As I put my pen down and grin back in appreciation, Arvind bows and prepares to leave. Stopping him in that moment barely deserved effort, as I had already taken enough time off his service. For all his anecdotes, I couldn’t even offer a cup of tea.
It was a great day, indeed. I realized how a dream can change the way one lives. I now see Arvind and ponder, what could’ve possibly happened had I opted to chase my dream girl 😉
Abhishek.