Goan Architect Turns ‘Waste’ Into Beauty Through his Breathtaking Buildings 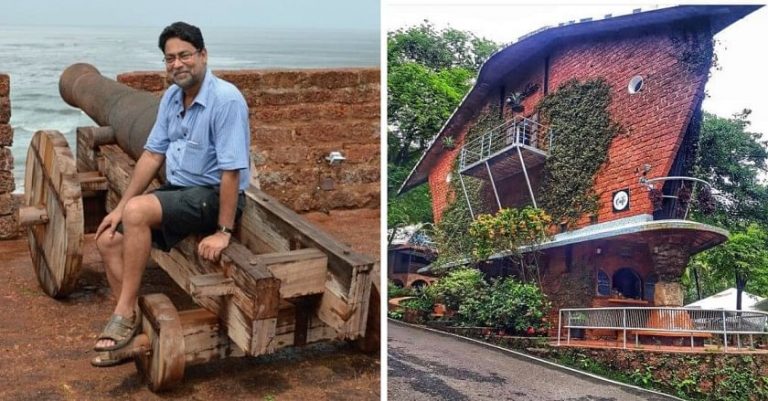 Goa-based architect Gerard Da Cunha has been celebrated over the years for his unique and unusual architectural style that revolves around nature.
“I always come up with my designs on site. If I sit at my office, I won’t know the energy of the space I’m designing, I won’t know how the wind flows nor will I know if there are any trees that I’ll have to design around,” the 65-year-old architect says.
Using waste and locally-sourced materials like timber and stone, Gerard has built several architectural structures which include universities, libraries, museum, resorts and even townships all across India.
‘The Better Home’
We created ‘The Better Home’ because you shouldn’t have to choose between non-toxic ingredients and effective cleaning. Our cleaners are safe for babies, pets, skin and our oceans. Explore our range of powerful, earth-friendly cleaners here.
Gerard is the principal architect of his architectural firm, Architect Autonomous and in his career of four decades in the field of sustainable architecture, his work has gained popularity for his unique designs and his out-of-the-box thinking.
Imbibing A Sustainable Style
When he was a third-year student of Architecture at the School of Planning and Architecture, Delhi, Gerard took a one year break to travel to Kerala and assist the famous architect, Laurie Baker the renowned ‘Gandhi of Architecture’. “I was really inspired by his simple and efficient techniques and it was through him that I was able to imbibe my own style. As a result, none of the work that I have done so far is standardised. Every structure has been built with respect to the local materials available and the nature of the land,” Gerard explains.
One of the most popular works of Gerard is the three-storied House of Goa Museum, known for its unique ship-like structure. Nisha’s Play School and Shiksha Niketan, also located in Goa, stand testimony to the architect’s unique style which includes the use of several discarded materials. And one of his more elaborate projects, the JSW Township has also received a lot of recognition for its incorporation of locally-sourced materials and limited budget.
All of these have been built with minimal resources and have explored different levels of spatial experience.
House Of Goa Museum
Gerard’s ‘Houses of Goa’ Museum in Torda, Goa, is an architectural wonder that one cannot miss. The three-storied museum built with laterite stone is shaped like a curious triangle. Also known as Gerard’s ‘traffic island’, the museum has its walls panning out, like a ship. “With just 40 sqm on each floor, one can easily get a glimpse of the rich cultural heritage and history of Goa starting from 1300 BC with photographs, maps, models of ancient houses, collection of designed pillars, windows designs, carved furniture, false ceilings, tiles and literature of houses and the people of Goa even before the Portuguese invasion,” says architect Yash Shah, who had visited the museum in 2018.
He goes on to explain how Gerard converted the ground floor café into a semi-museum by displaying photos of kitchens and bathrooms of different Goanese houses, all at a total cost of Rs 20 Lakh. “The design of each structure differs depending on the energy of the space, local resources, the budget, land availability, and traditional aspects that are relevant to that particular area,” Gerard explains.
Because of his architectural style that is closely associated with keeping traditions alive, government authorities commissioned Gerard to restore the oldest fort of Goa — Reis Magos Fort which had been lying in ruins for a long time. After restoration, the fort is a popular tourist destination showcasing the history of Goa.
Gerard has also designed the Goa State Central Library located at Panaji, which is home to more than 1,80,000 books.
Nisha’s Play School and Shiksha Niketan
The unique designs of two schools in Goa, Nisha’s Play School and Shiksha Niketan have also received a lot of recognition.
Set on a slope, these two schools have been uniquely designed for two sets of different age groups. The playschool, for ages 4-6 and the preschool is for classes 1-4. Breaking away from the usual staircases and classrooms seen in Indian schools, Gerard decided to create a fantasy land for the children incorporating outdoor classrooms, a slide that goes through the entire building and an amphitheatre with walls made of glass bottles.
Ruhma Ukaye, Architect and Photographer based in Mumbai tells TBI, “The amount of thought put into the little details of how a child would use the school just blew my mind, it’s a whole different perspective of the world I got to experience. The use of materials such as bricks, mud, mosaic tiles, and even glass bottles for construction does portray a very direct, yet ingenious approach to sustainable and vernacular architecture.”
At a cost of Rs 150 crore, Gerard took on the task of building a township for the JSW Steel Plant in Vidyanagar, about 30 km from Hampi, Karnataka. Spread across 300 acres, the project was planned to house 10,000 people. From sewerage lines, transformers, treatment plants to telephone systems, Gerard and his team put together everything.
“I didn’t find it very difficult when it came to sourcing materials because I used granite for the most part of the project and utilised prefabricated systems and Cuddappah stone, which was famous in Karnataka and Andhra Pradesh. I just had to think in clusters and find out what were some of the things that were unique to that particular area,” Gerard explains.
For the project, the architect won the prestigious Prime Minister’s National Award for Excellence in Urban Planning and Design in 1998–99. He has also won the ‘Commendation Award-1990’ for rural architecture for his project ‘Nrityagram’ at Bengaluru, Karnataka.
“My architecture is completely based on creating a structure that belongs to that area. Our country has such unique traditions and cultures, yet when it comes to architecture we’re now opting for more standardised structures and use materials that are not unique to the region. This is something that can be changed in the coming years,” Gerard concludes.

The story has been extracted from https://www.thebetterindia.com/232901/goa-architect-discarded-materials-waste-green-sustainable-home-house-of-goa-museum-shiksha-niketan-ser106/