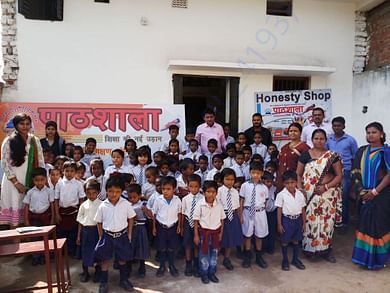 In these times, when the whole country is in turmoil due to the corona epidemic, the poorest get affected the worst. Today due to the corona lock-down, 1000’s of coal mine manual laborer families are starving because of no source of income.
“I stay in an area where many coal mine workers live, who have no source of income today, given the situation, and are starving. I immediately started providing ration items for these families, in my capacity.” -Dev Verma
Dev Kumar Verma, the Manager of Coal India Limited posted at BCCL , Dhanbad and the founder of Pathshala – free school chain for children working in coal mines, is helping them by providing ration items like soap, handwash and food supplies – rice,  wheat, pulses, salt, soybean, turmeric.

Dev has provided supplies to several villages, that can help them with 2 meals a day. Till date, he’s served more than 16000+ families ( One Lakh one time Meals) .

Dev works for the welfare of children working in coal mines, in Dhanbad – Jharkhand :

It isn’t unusual for children here, to start helping their family by earning some money from the tender age of 6-7, by working in mines. These children never get to attend a school or run and play around like other children do. Their faces are usually blacked from the soot and grime.

Dev himself was born into a family of coal mine workers and spent half his childhood hunting for aluminum wiring discarded by coal companies in old mines, which he would then melt and sell as aluminum blocks to buyers. But this life wasn’t enough for him.

Dev knew the only way out of this poverty was to get educated. He’d take tutions and work at a paan shop – to afford his education. His unrelenting hard-work helped him climb his way up, today becoming a Manager in the same coal company where his father worked as a Grade D employee.

‘I saw a new generation of children going through what I did, and knew I had to help them’
For people like Dev Verma — and the 400+ children enrolled in his Two primary schools in the poorer parts of Dhanbad, Jharkand — a good education is the only lifeline out of spending their life on the streets or toiling away in a coal mine.

Education is the only thing saving them from abject poverty.

You can support Dev by reaching out to him at 9470595075. You can support his current campaign of providing food to coal miner families on this link – https://milaap.org/fundraisers/pathsaladhn