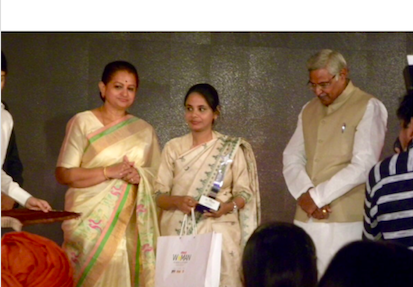 ‘We know where you live’, ‘We will show you’, ‘Take care of your family’ are some of the common verbal threats that Basu Kannogia has faced. Here’s how she fights against the tide to the right thing.
Famously called ‘Encroachment Eviction Specialist’ among her peers, Indian Forest Service (IFS) officer, Basu Kannogia is known for her fearlessness.
Ever since the 2012-batch officer took charge in 2014, Basu has been fighting against forest mafia for unlicensed sale of trees, illegal settlers on forest lands, miners and wildlife-related crimes.
Basu has had her share of troubles for abiding by the laws without fear or favour. She has been in the epicentre of threats, and controversies.
But that has not stopped the fierce woman from discharging her duties in a career spanning five years and seven transfers. Over the years she has successfully freed more than 6,000 hectares of encroached land in Madhya Pradesh.
‘We know where you live’, ‘We will show you’, ‘Take care of your family’ are some of the verbal threats that Basu has faced many times.
There have also been times when encroachers and forest officials have engaged in a physical tussle and gunshots had to be fired to control the situation.
While Basu is brave enough to directly face the wrath, her family suffering because of this is not acceptable to her, “When times get tough, I disconnect all communications with my family members. It is unfair to drag my loved ones in the turmoil.”
She adopts a common strategy to conserve the forests, regardless of the postings.
“There are two types of encroachers – temporary and permanent. Usually, we have to take the land from temporary ones which happen to be the seasonal farmers,” she says.
Basu starts with studying the locals and identifying schemes that could provide alternative livelihood or rehabilitation. Patrol or inspection is the next step which also makes for a subtle warning. Often, to ensure the quality check, Basu does not tell her teammates about the inspection.
A discussion is held with the locals and legal route is taken only if there is resistance. In case of legal action, Preliminary Offence Report (POR), equivalent to an FIR is filed against the concerned people which is usually enough to get the work done. Post eviction, the forest department covers the land through plantation. The process lasts for anything between 30 days to four months.
Basu has also taken local politicians and government officials head on. Refusing to bow down to them, she has even sent them notices like in 2018, she fought against the construction of the house in the forest area of Umaria district, MP, by sending legal notices to the collector and superintendent.
Two months later, she was transferred. She met a similar fate in Nauradehi Wildlife Sanctuary for opposing illegal tree felling and in Laundi forest range in Chhatarpur where she managed to freed 300 hectares of land from illegal settlements. Her most recent transfer was from Panna Tiger Reserve, MP where she served as the Deputy Director.
Within a year, Basu was handed a transfer letter without underlining the reason behind it.
Presently, Basu is serving as the DFO in Ratlam Forest Department where she has already liberated 300 hectares of forest land from jungle mafia in just three months.
Braveheart’s Message to Civil Aspirants
“Saying no to favours or wrong things is the first and most crucial aspect of being a government official. Do not be afraid and use the platform to save nature and country. There will be a lot of people who will have hopes from you and your post. Working in administration is a thankless job, you won’t get a medal every time you do the right thing. Your batchmates may get more lucrative positions but it is inner satisfaction that will keep you going and make you do better each day amidst the mental pressure,” says Basu.
In her seven years of service, the 33-year-old Kanpur woman has time and again proved that nothing is beyond the call of duty. No amount of threats, political interference or agitations can come in Basu’s way and distract her commitment to protect forests and wildlife.
Here’s hoping that more civil aspirants turn out to as brave and loyal as Basu Kannogia.