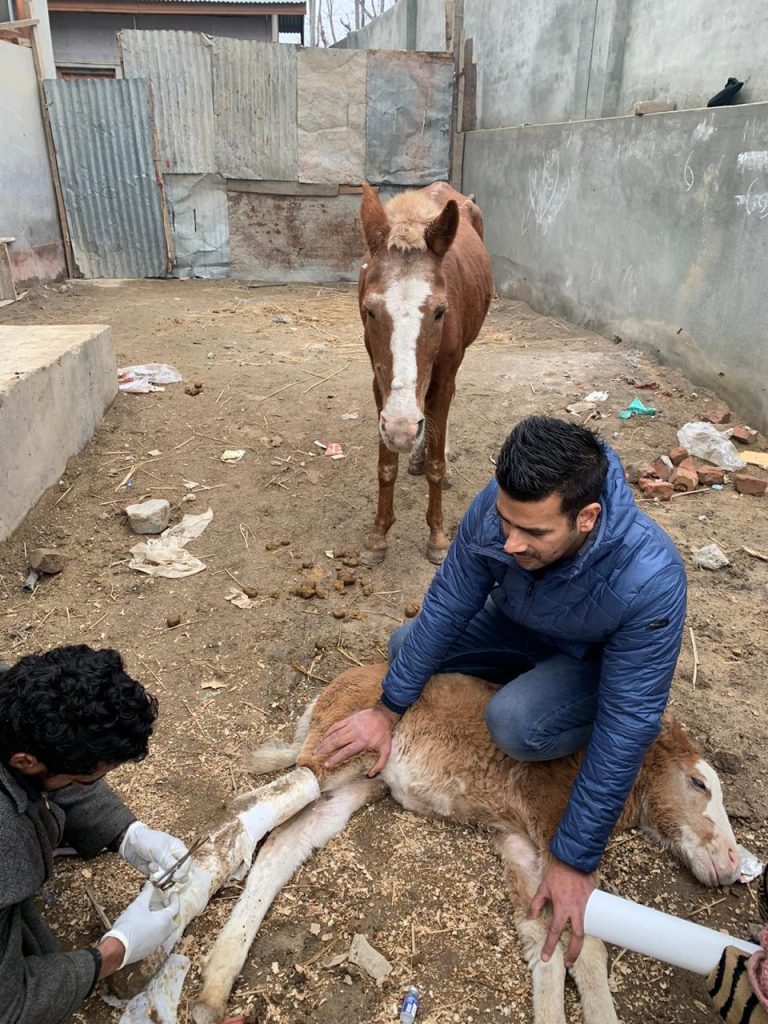 It is another Monday in Srinagar, Kashmir, and for Dawood Mohammad and his wife Mariya Mushtaq, it means yet another day of calls from people who have spotted an injured animal.

Being one of the only few rescue centres in the valley, Dawood says that the work at Animal Rescue Kashmir is never-ending but he wouldn’t have it any other way.

It all started in 2017 when he returned to Srinagar from London, where he was working and studying and noticed the prevalence of instances of animal cruelty in the valley. This animal lover would often rescue dogs in the neighborhood that were hurt by helping them get medical aid or even distributing food.

With time, his area of focus expanded. Today, not just people in the vicinity but also those across the valley reach out to Dawood when they spot an animal that needs help and he always obliges.

Mariya and Dawood run Animal Rescue Kashmir, a venture that was started in 2018, that aims to alleviate the sorry plight of animals in the Kashmir Valley.

“Based on the advice of the vet, I would give these stray dogs the medicines that would help their discomfort,” he says. Recounting the first-ever rescue he did, he says it was of a paralyzed pup near his home. “The pup’s hind leg wasn’t okay and on closer observation, I discovered that its body was inflicted by multiple wounds and these had maggots in them.” Dawood immediately rushed the pup to the vet and following the visit, kept the animal with him for a year and a half.

The duo went on to help many such voiceless creatures, sometimes with medical aid and other times by simply taking good care of them at the rescue centre. The space was given to them by the local municipal corporation and is about 200 sq ft.

“People contact us through call or WhatsApp and since we may not always be able to go on-site, we ask them for pictures and videos. This helps us get an idea of the severity of cases,” says Dawood.

Once he receives the details and can assess the state of the animal, he gets his staff together and they plan on how to go about it. He says, “We don’t have transport of our own, and so we contact load carriers and auto drivers and ask them to come to the shelter and load the equipment such as the cages, medical equipment, bandages, iodine, etc. or in the case of larger animals, ropes, grass to lure animal, etc. We then go to the site and take the animal to the vet or the shelter.”

At the shelter, dogs are given food twice a day. The meal includes rice mixed with pulses and soybean, and sometimes even non-vegetarian food. Horses and cows are given hay and dry grass fodder.

He adds that the biggest challenge they face is a lack of ambulances and space. The space too is small and overcrowded, increasing the chances of cross infection.

Additionally, adoptions are a concern. “Though we put up posts on social media, so people can come and adopt, there are many social stigmas here as keeping dogs is not a done thing in a Muslim majority community.”

To date, the shelter has helped 1,200 animals, says Dawood adding that they receive 8 to 10 calls a day and can do around three to four rescues.

“Currently, we are trying to raise funds to get ambulances so we can reach the destinations on time and even at odd times when transport may not be available,” says Dawood, who finances the venture through the earnings of the clothing store that he runs. “The yearly expenses amount to Rs 20 lakh and thus funds are of utmost importance.”

The story has been extracted from https://www.thebetterindia.com/297672/kashmir-couple-start-animal-rescue-shelters-for-wounded-animals/