Children are the Changemakers – Making World a Better Place 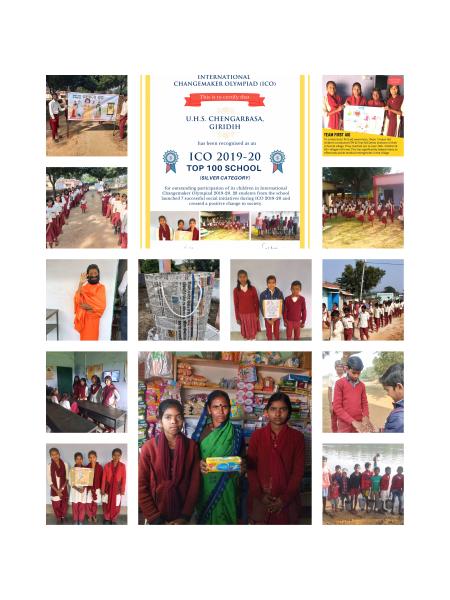 Tucked deep into a forest area of Jharkhand, Chengarbasa is a small tribal village that houses a group of little wonders, with a dream to bring about change in their village. These little wonders are taught in the Upgraded High School(UHS) by ten online volunteer teachers of eVidyaloka Trust, through its program implementing partner Samajik Parivartan Sansthan(SPS), along with three school teachers and the Headmaster.
The online classes run by eVidyaloka Trust, a non-profit based out of Bangalore, in the school since 2015, gives a window to both the children and the volunteers to connect and continue teaching-learning process. The urge to learn and grow in life among these children is indeed inspiring. Their participation in the International Changemaker Olympiad (ICO), a global competition where students start their changemaker initiatives to solve real-world problems affecting them and their communities, guided by their Olympiad mentors, speaks loud about their grit.
Twenty-eight children from the UHS, Chengarbasa, Giridih participated in the five months long ICO project during 2019-2020. They formed seven teams to launch seven relevant and much needed social initiatives with guidance from their mentors (eVidyaloka online teachers), to create a positive change in their village. The children constituted a student’s council, hence becoming leaders and influencers in their school and community.
UHS, Chengarbasa has been ranked under the Silver Category of ICO and recognized as one of the ICO 2019-20 top 100 schools amongst 1000+ participating schools. Apart from this each of the seven teams has been recognized under various award categories.
Changemaker Award for “Yoga for fitness”– The team included 12-year-old students Shriyansh Suman, Chandan Kumar Verma, Shubham Kumar Verma, Saurabh Kumar Verma. The team has learned yoga via online classes and started yoga classes in their school during the morning assembly, upon realizing their unhealthy lifestyle. The team dressed as ‘Baba Ramdev’ in their school fancy dress competition to spread the importance of yoga. Till now, they conducted 40+ sessions and 258+ children benefited from it. As a result, Yoga is including in their school routine, and children are leading a healthier life now.
Campaign Award for “Use Toilet & Stop Open Defecation” campaign: 14-year-old children Pankaj Bersa, Shivani Verma, Govind Soren, Neelam Kumari conducted an awareness campaign on Stop Open Defecation & started a practice of collecting water from the pond to use it in the toilets. This happened after they realized the health hazards caused due to open defecation practices in their village. They carried out a road rally and door-to-door campaign to helped the village understand the health issues caused due to open defecation.
ICO Finalists for CPR & Basic First Aid– 13-year-old children Sarita Kisku, Bipasha Kumari, Khushi Kumari, Seena Kumar learnt CPR & first aid techniques through online sessions with guidance from their mentor. Then they conducted CPR & First Aid Demo sessions and prepared posters on the prevention and cure of various diseases in their school and village to create awareness. 260+ children & 60+ villagers learnt how to effectively tackle medical emergencies in the village till date.
ICO Finalists for Be Confident girls – Menstrual hygiene & care: Another ICO Finalist team was of 15-year-old students Preeti Kumari, Soni Kumari, Kalpana Kumari, Anshu Kumari. They conducted menstrual hygiene workshops in their village, where conversations on the topic is a very difficult task, to spread awareness and break myths on menstruation. They also made sanitary pads available in their school and shops at the village and propagated its use in their homes and community at large. This team successfully achieved this feat that resulted in women becoming more conscious about their health.
Special certificate of appreciation was given to the remaining three teams who worked on “Personal Hygiene”, “Women education & personality Development” and “Reduce use of plastic & use eco-friendly items”.
We live in times when taking ownership of our situations and initiatives to bring about positive change is the need of the hour. These little wonders have emerged from an absolute naive state to become changemakers in their rights. This has been achieved by eVidyaloka Trust’s vision of online classes and empowering the stakeholders to bring the change since 2011 across 10 states, in 230+ schools with 1700+ volunteers from across the globe. Imagine these children becoming a government official/administrator/political leader/educator, rest assured the future of our nation is bright and shining!
Last, but not the least, the stakeholders here namely, the volunteers, ICO, NGO Partner SPS, Donors, Students, and of course the school, community, and parents are the invisible catalysis of this system of change.