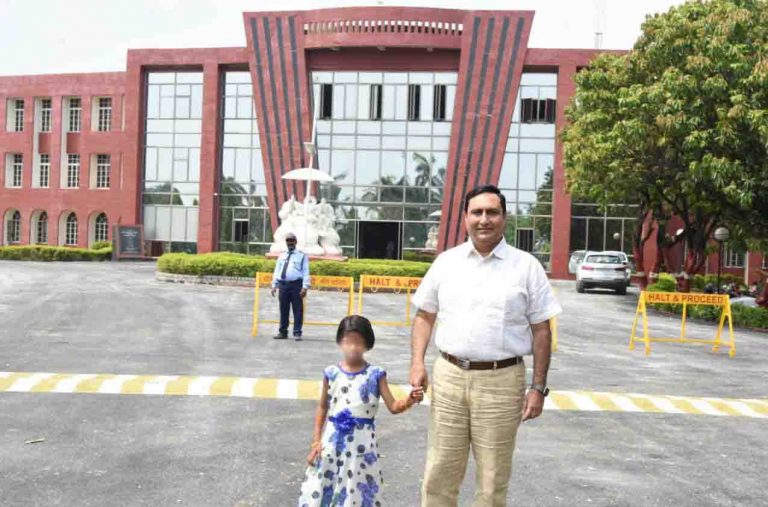 Sanjay Kumar Alang, the District Collector of Bilaspur, Chhattisgarh, was doing the annual inspection of the city’s Central Jail. While he was checking and discussing the personal details of the inmates, their concerns, and how well the police officers are maintaining the jail, he came across a scene that took him by surprise. A young girl sat among a group of women inmates. The playful girl warmed the IAS officer’s heart resulting in him admitting her in an International School!
It was beyond Alang’s call of duty but within his voice of conscience to inquire about the girl. When Alang ensured that the little girl got quality education, he did not know that this kind act would trigger socially responsible people and organisations helping several other children in the jail.

Some things in life can only be called destiny. In the case of Khushi (name changed), where fate landed the innocent child in jail, the same fate led her to the benches of an esteemed International School in Bilaspur.

“There was something adorable about her that begged me to inquire how she had landed in jail. As it turns out, her mother had passed away due to jaundice when Khushi was just 15 days old. Her father, convicted of a serious crime, has been in the jail for five years now and Khushi had to shift there with him because the kid had no one else to take her responsibility,” Alang told The Better India.

According to norms, children of female convicts are allowed to live with their mothers in jail. In cases like Khushi, where the child is motherless with no one else to take care of them, the child lives in prison with their father until they are six years of age.
Tigga, the jailer at Bilaspur Central Jail shares some insight about this rule. “Kids of inmates are kept in jail until they are six years of age. In the case of this Central Jail, 2-3 kids were born in prison. Here, the women inmates take care of the children until they are of age. After they turn six, they are either handed over to their relatives or given to the government-run creche. Usually, the children are also enrolled in government schools to ensure they are not deprived of the opportunities,” he said.
While inquiring about Khushi’s family, Alang asked the little girl what she wanted to do in life.
“Khushi told me that she wanted to study in a good school, so once the inspection was over, I started asking around about her admission prospects. The Jain International school came forward to fund her education and accommodation up to class 12, and I am delighted to tell you that the admission process has been completed. The kids living in the jail premises neither study nor have a set schedule for activities. All for no fault of their own,” Alang tells us.

Soon after, Khushi visited the school, awestruck at the classrooms where she will now be studying, the campus where she will now be playing. Tigga tells us that currently, 17 children are living with their mothers in the Bilaspur jail. Taking a cue from Alang’s initiative, many NGOs have come forward to help the other kids secure admissions in various schools that promise quality education and facilities.

We hope such good turn gets translated into several similar initiatives. Keeping the kids in jail with their convicted mothers is a highly debated topic in India. We may not arrive at a consensus soon, but the children should not miss out on opportunities for no fault of theirs. Alang has set the wheels in motion, and we wait to see if others will follow the lead.