A Service That Matters in Times of Distress 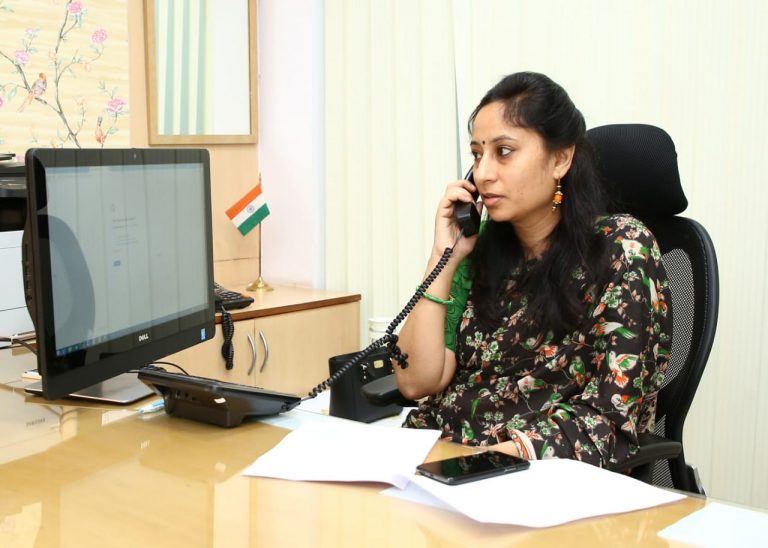 Armed with a team of 60 officials working round the clock at Bihar Bhawan in New Delhi, the 2004 batch IAS officer, Palka Sahni has been tackling the concerns of migrant labourers since lockdown-I. Now as the country has gradually moved to ‘Unlock-I’, her roles and responsibilities during the COVID-19 pandemic set a precedent in the corridor of Indian bureaucracy.
The 2004-batch Bihar Cadre officer of  Indian Administrative Service and the Special Resident Commissioner of Bihar, Ms. Sahni is spearheading a 24×7 helpline-cum-control room at Bihar Bhawan in assisting the stressed migrants and addressing their concerns of food, shelter and several other umpteen requests and grievances amidst the Covid-19 outbreak.
Besides monitoring the helpline set-up, she is also the Nodal Officer of Bihar in Delhi for the movement of ‘Shramik Special’.

She stated, “Unprecedented times demand superlative measures. This pandemic is a real test of time for all of us. We still get plenty of requests from migrants of Bihar to travel back to their homeland and we are still assisting them.”

Serving the distressed
Bihar Bhawan reached out lakhs of migrants with the helpline model. Three helpline numbers with ten hunting lines have been operational since 25th March, the day when the first lockdown was announced.

The IAS officer says, “With every extension of the lockdown, we scaled up the trajectory of our strategic preparedness and response accordingly. During the first phase of lockdown, we focused upon locating the nearby food relief centers and shelter homes for the migrants in the concerned states. The IT team at work collated the demographic details of the migrants and other important data. It helped us create a database which later used as cornerstone of the entire relief works. We have ensured effective use of social media where migrants could reach out via Google Doc, WhatsApp, E-mails, Facebook and Twitter.”

Beyond the Helpline
Ms. Sahni is known for her quick and time-bound redressal of queries in wider periphery. During the pandemic, she took to Twitter for settling the crises and concerns of migrants throughout the day and night. Acting swiftly upon a Twitter thread, she reached out to a nonagenarian man who was stranded at a railway crossing in Delhi under some unforeseen conditions and evacuated him to his village in Samastipur, Bihar. Another girl from Bihar who lost her husband and was stuck in Ahmedabad (Gujarat) under grim situations was rescued and sent home to Muzaffarpur in Bihar as the aggrieved girl shared her ordeal in a Facebook post.
Managing ‘The Shramik Special’
Under her leadership as the Nodal Officer of Bihar in Delhi, the migrants labourers traveled back their homes in various districts of Bihar from Delhi by trains. She informed, “More than 113 Shramik special trains ferrying almost 1.75 lakhs migrants have departed to various districts in Bihar from the National Capital. The migrants who registered themselves at the portal of Delhi Government are contacted and sent to Bihar accordingly. Requests received via Twitter and WhatsApp were also addressed and acted upon. Under certain emergency situations, we have provided urgent travel passes to many a migrants. Several NGOs working diligently on ground have also supported us for the distribution of ration and other facilities.”
Decisive roles in ‘Make in India’ and ‘Ease of Doing Business’
The IAS officer has served as the Director in the ‘Department of Industrial Policy and Promotion’, Ministry of Commerce & Industry where she performed decisive roles in noted flagship initiatives of the Government of India, like “Make in India” and “Ease of Doing Business”. She led a team that saw India breaking into the Top-100 in the World Bank’s “Ease of Doing Business” rankings. She has also served as Executive Director at Integrated Power Development Scheme (IPDS), PFC Limited. It was also a Government of India’s flagship programme aimed at strengthening and modernization of power distribution system in urban areas.

Ms. Palka Sahni has been District Magistrate of three districts in Bihar and was the first MD of the ‘South Bihar Power Distribution Company’. Her consistent efforts led to large scale improvement of power availability in the state as well as strengthening of electricity distribution infrastructure. She has also headed the ‘Bihar State Electronics Development Corporation Limited’ and led from the front in execution of IT Programmes.