A charity which fed lakhs of people 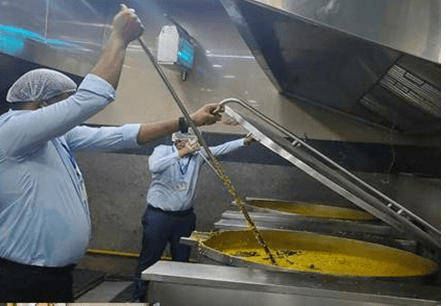 “Please don’t cook tomorrow’s lunch. You are all cordially invited to have lunch with us tomorrow,” reads an invitation card that is delivered to every shanty of a slum area in Ahmedabad by a person. These cards bring glitters to these poor people’s eyes and smiles on their faces.

The next day, a truck rolls down the slum streets and when its doors are opened the aroma of delicious food fills the nostrils of the people eagerly awaiting for the truck. Once the truck arrives, residents of the slum make a queue in an orderly manner.

Around 15 people who arrived with the truck start handing over disposable plates and bowls and then start serving them chhole-kulche with gulab jamuns made in pure ghee. Everyone is welcomed for a second and even a third serving. When the food truck and people leave, they leave behind a slum full of satisfied and happy people.

Mayur Kamdar, 59, and his 54-year-old wife Pranali have embarked on a charity marathon for the last one year with a slogan, no one should go to sleep with an empty stomach.

Mayur and Pranali started this charity on September 3, 2021 and so far they have fed around 2 lakh poor people living in 66 slums in Ahmedabad and Gandhinagar.

Mayur Kamdar, who is a businessman, and his wife a homemaker select a different slum almost every day and announces about it to the slum-dwellers a day before so that they are prepared and no unruly scenes are created.

The couple, residing in Bodakdev, spends Rs 25,000 to Rs 40,000 per day, depending on the slum population. “We are just carrying on my mother-in-law Manjuba’s legacy. Starting from 2003 till she passed away in 2008 she used to stack up a van with clothes, shoes and food and distribute them among the destitute people across Ahmedabad. She used to take me along.” said Pranali.

She said that after Manjuba passed away and their kids got settled they used to do charity but not so regularly. The couple has a son Harshil and daughter Bansari. Harshil is settled in the US while Bansari is working with a multinational firm.

“In September 2021, we decided to do this every day. We wanted to carry on the legacy of my mother and decided that we will provide quality food that the poor people can’t afford to eat at restaurants. We serve dishes like chhole-kulche, gulab jamun, idli, medu vada, pav-bhaji, jalebi,pizza, manchurian and dal-bati among other dishes,” said Mayur Kamdar.

“We have hired a staff of 15 people who cook and serve the food in slums everyday. Sometimes they cook in the slum itself so that people can be served hot food. We provide disposable dishes so that they don’t have to bring utensils. Most of the time my wife Pranali accompanies the staff to slum areas and helps them,” he said

The story has been extracted from https://timesofindia.indiatimes.com/city/ahmedabad/ahmedabad-meet-couple-who-will-not-let-the-poor-sleep-hungry/articleshow/94140138.cms